Free Tour of Florence at sunset

Florence is one of the most beautiful and visited cities in the world and joining our tours will give you the opportunity to enjoy more of the beauty of its monuments and treasures, through the discovery of the families that made it great during the Renaissance, such as the Medici. Our guides (all licensed) will show you the jewels of the city and will tell you the anecdotes that only those who live here know. They will also give you tips on authentic restaurants and shops and of course on how to avoid tourist traps. Don't miss out on visiting Florence through the eyes of a local! We have three different tours. 7.30 am - Free early morning walking tour of Florence (only in English and Italian) We will depart from the historic center and cross the southern hill; We will arrive at one of the most beautiful viewpoints in the city: Piazzale Michelangelo. An unmissable opportunity to admire Florence and its monuments from above: the Ponte Vecchio and the Uffizi Museum, the Duomo and its Dome, the Piazza della Signoria and many other places where we will not stop telling you the history and a little anecdotes. . 10.30 am - The beauties of Florence - Free walking tour (in English, Spanish and Italian) We will show you the beauties of Florence on a path that starts from Piazza Santa Maria Novella, where the tour of the historic center begins that will take us to the Piazza Santa Croce where the tour ends. During the tour, we will be able to admire all the main monuments of Florence such as Piazza Duomo with the beautiful cathedral, Giotto's bell tower, the sumptuous Baptistery and the beautiful Brunelleschi's Dome, Piazza della Signoria, the Uffizi museum and the Ponte Vecchio. 06.00 pm - Free Tour of Florence at Sunset (in English, Spanish and Italian) We will visit the Oltrarno (the other part of the city on the other side of the Arno River), one of the most popular and fascinating areas of Florence.

Our OLTRARNO and PITTI tour starts in the center of Piazza Santa Maria Novella. We will talk about the history of Florence right in front of the Church of Santa Maria Novella and then, through Via del Moro, we will arrive at Piazza Goldoni facing the Arno River.
We then return to the elegant Via Tornabuoni via Via della Vigna nuova and stop in front of Palazzo Strozzi, one of the most beautiful Italian Renaissance palaces, built by Filippo Strozzi. A wealthy merchant who belongs to one of the wealthiest families in Florence and is traditionally hostile to the Medici faction. In Via Tornabuoni, among the luxury shops, you can admire some examples of buildings from the 19th century, when Florence was the capital of Italy. We then find Piazza Santa Trinita and cross the Ponte Santa Trinita, a Renaissance bridge with a wonderful view of the Ponte Vecchio. We arrive at the other part of Florence called Oltrarno, one of the most fascinating areas of Florence, where there are monuments, gardens, museums and monumental buildings unique in the world, as well as workshops of craftsmen, goldsmiths and restorers who make L Oltrarno in Florence transform the area of Florence where the most authentic Florentines still live. We then arrive at Piazza della Passera, a hidden gem full of artisan shops, gastronomic delights and a rich history. Through Via Toscanella, a narrow and hidden street with beautiful murals, we reach Piazza Pitti, where you can see the monumental Palazzo Pitti, a fortified building on a small hill. Last part of the route: Via i Guicciardini we arrive at the Ponte Vecchio, where the route ends. You can then decide whether to cross the bridge and head towards Piazza della Signoria or return to the lively nightlife of the Oltrarno. 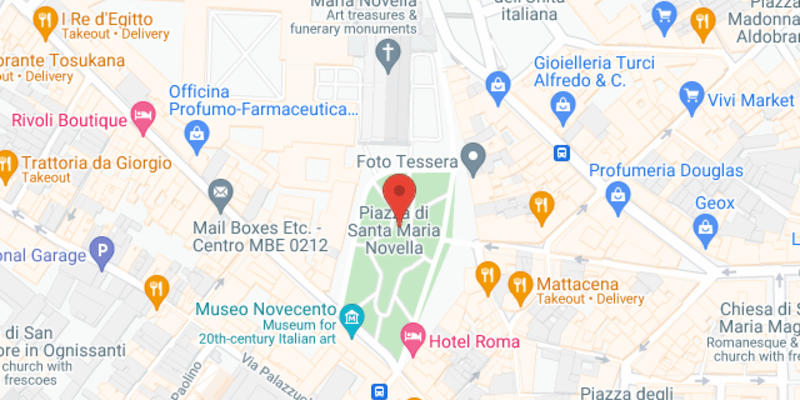 The tour was very informative and the guide was very friendly. We had a blast!

Minimum of attendees
A minimum of 5 people is required for the tour.
Additional costs:
The tour does not require the payment of entrance fees or additional expenses.
Free cancellation
If you will not be able to attend the tour, please cancel your booking, otherwise the guide will be waiting for you.
Free tours
Italy
Free walking tours in Florence
When do you want to go?
Sun
Mon
Tue
Wed
Thu
Fri
Sat
Show more 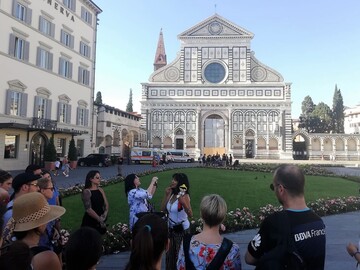 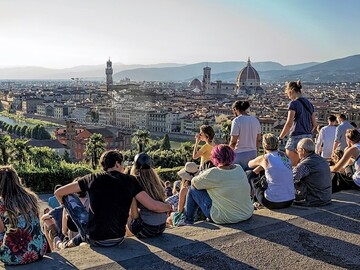