I been working as a tour guide for more that 27 years. I have a great experience in the sector, and I have a broad knowledge of the history of the city.

I been working as a tour guide for more that 27 years. I have a great experience in the sector, and I have a broad knowledge of the history of the city.

**NO LAST HOUR RESERVATIONS OR FOR THE NEXT DAY ARE ACCEPTED**

The city of La Antigua Guatemala, known in colonial times as the city of Santiago de Guatemala and by others as the city of Santiago de los Caballeros de Guatemala, has always been a magical city that attracted many people since its inception in 1543, although its line begins in 1542 by the architect Juan Antonelli. The city was affected since its inception by earthquakes that were, in one way or another, shaping the unique architecture that developed in this place.

It is worth mentioning that it was the capital of the general captaincy of Guatemala, which covered from Chiapas to Costa Rica.

In this tour we will see the most enigmatic parts of the city:

- The source of the Sirens

- The Palace of the General Captains

- The Palace of the Very noble City Hall

- The Cathedral (The church and its ruins)

- The frontispiece of what was the Old University of San Carlos

- Facade of the convent of Santa Clara

- The church of San Francisco

How to find me: At the entrance to Cafe Condesa, in the Central Square

Response from Hector
Thank you!

Great tour - I was the only person so ended up doing part English. Hector was very knowledgeable &amp; I felt that I learned tons about the history behind the city (really eye opening; much better than just walking by things and missing all the details :) would definitely recommend!

Response from Hector
Thanks a lot Julielet!

We had a great walk with the very knowledgeable Fidencio. Can definitely recommend a tour with him and learn about the history and culture of Guatemala and the region.

Response from Hector
Thanks for your comments Eva-Lena, those make us offer always a better and better services. Best regards, Hector 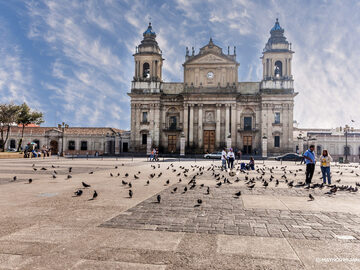 Getting to Know Guatemala City by Public Bus and on Foot.