Discovering the Old Town of Istanbul; including inner visit to Hagia Sophia

We are a group of licensed English speaking tour guides who works with History Travel. We were born and raised in Istanbul. We combine our experience in the field with our endless passion for our beloved city to create the best experience for tourists from all over the world. Make yourself a favour and book one of our walking tours.

We are a group of licensed English speaking tour guides who works with History Travel. We were born and raised in Istanbul. We combine our experience in the field with our endless passion for our beloved city to create the best experience for tourists from all over the world. Make yourself a favour and book one of our walking tours.

"A rollercoaster journey from mosques to crowded markets, it is a fantastic way to see Istanbul" said one of our clients in the past.
We invite you to discover one of the most amazing cities on earth. This gorgeous city has many interesting stories to be told. Listen it's stories while exploring old town in this walking tour.

Discover the Roman Hippodrome, see the famous Blue Mosque and Haseki Hürrem Baths from outside, visit Hagia Sophia which is  one of the most iconic buildings of the world  and awaken your senses at Egyptian Bazaar. Get suprised by the hidden gems, columns and cisterns.  Learn the culture and customs and see Istanbul from a local's eye.


Are you ready to fall in love with Istanbul?


RESERVATION IS REQUIRED because we have a limited space in our tours for a better experience.


The tour is only in ENGLISH.

Our tours are conducted by professional and licensed tour guides, and it's totally free to book and join the group. Considering that these tours are our guide's full time job to make a living and it will be a moderate-sized  group for your comfort, we recommend rewarding the guide minimum 10 € \ 10 $ \ 200 Turkish Liras per person for her\his job. 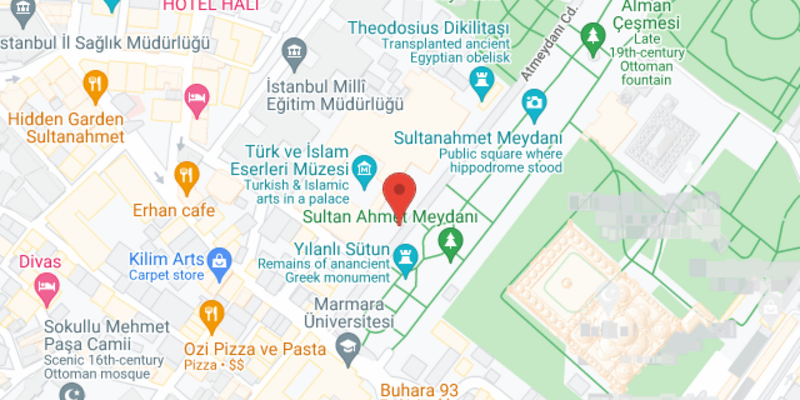 How to find me: In front of the Museum of Turkish and Islamic Arts. The guide will carry a BLUE FLAG.

I had a great experience, the guide took the perfect amount of time to explain everything inside the Hagia Sophia.

What an incredible tour! Yasemin was the best guide that I have ever seen in such a tour. I really enjoyed every minute of it. The recommendations that we got after the tour is super helpful for the rest of the stay. Thanks for this wonderful morning.

Jasmin was extremely knowledgable and was able to give us lots of information about the history of the Old Town. Main negative - we had already been inside The Hagia Sofia and didn’t want to go again so we arranged to meet at the exit on the side street. We bought a drink and then waited for at least 45 mins outside for the group to come out. We eventually saw the group come out of the Mosque but the talk continued on the inside of the grounds rather than coming out into the street to meet us and a few others waiting. We waited another 10 minutes for them to come out with no movement and then decided that as there was only about an hour left of the tour and we had already seen some of it we would leave. A real shame as I’m sure we would have learnt a lot more about the town with Jasmin but just maybe better organisation over when to visit the mosque and how long is spent there would be better.

Response from Walking Guides
Thank you very much for your comment. We do really spend a quite long time in Hagia Sophia because it’s the highlight of our tour and we have some important things to tell about this masterpiece. After we came out, we spent some more time in the garden because this is where we give a toilet break for people to use its clean toilets. Since we arranged to meet with you at the exit and you were not there, I’ve walked extra to the front of the mosque to check and to be sure that we’re not leaving you behind. We’re sorry that you’ve decided to leave and didn’t finish the tour with us.

We enjoyed our tour very much. It was a hot day and he tried to keep us in the shade when making longer explanations. He knew the city!

A Tale of Two Continents; European Karaköy and Asian Kadıköy