Recommended
Based on travellers surveys. Only 2% of the best experiences in guruwalk receive this badge.
Free tour
557 ratings
4.8

Discover Historical Cartagena and Getsemaní in a single free tour through the scenarios of enslavement, pirates and corsairs, battles, graffiti, Salsa and Champeta and much more as a result of the mixture of indigenous, African and Spanish, libante migrants, libante migrants .

We start, at the agreed time, the free tour, in the Camellón de Los Mártires - Plaza de Cervantes we will learn about the indigenous people who were there before and during the arrival of the Spaniards. We move to the "Golden Key of Cartagena" or Clock Tower entering the Plaza del Ecuador , before the Plaza del Esclavo , prelude to continue part of the enslavement route through Porto Carrero and Candilejo streets . But first, about Founder Pedro de Heredía welcomes us.

We continue to the Portal de Los Dulces , a symbol of female activity in times of slavery and that their descendants still continue their traditions.

The commercialization process, of merchandise, including that of enslaved persons, in the old Plaza de la Contraloría , has been historically important, Andian National Corporation and the Mamonal refinery, the Municipal Mayor's Office.

Of course art is not alien to the tour, the Museum of Modern Art exponent of Caribbean and Latin American art of the 50's, the Gold Museum opens its doors with samples of indigenous pieces from the Colombian Caribbean and the Emerald Museum , stones of precious considered the most beautiful in the world, worn by celebrities

Religion is present with San Pedro Claver, Slave of Slaves, we will see the Architecture of the Church and Museum-Monastery that bear his name and is the Human Rights Headquarters.

Do you like the exploits of pirates and corsairs? We count them when visiting a Bastion, as a sample of Spanish military constructions and strategies, we continue to Plaza Bolívar, in homage to the precursor of Independence , a place to refresh ourselves.

We link the Plaza Bolívar, in homage to the forerunner of Independence and the Plaza de la Proclamación - Old Government Palace and the Centennial Park as scenes of the Independence of Cartagena and Colombia. Continuing along Calle Román is not only the symbol of the best drinks until it allows you to remember one of the Presidents of the Republic who has transcended in history.

Do you know the Sloth Bears, the squirrels, the iguanas? You will see them in one of the most important Lungs of Cartagena, Parque Centenari or, old Railway Station, which is a relict of Tropical Dry Forest where we cool off under the shade of beautiful trees.

We will enjoy one of the most important and colorful cultural corridors of Getsemaní, due to the umbrellas (symbol of the advertisement), the graffiti and the unparalleled architecture. Finally, we enter the Callejón Ancho , to reach the end of the route in Calle San Juan until the sound of salsa and African champeta; previously passing through the church and plaza de la Santísima Trinidad. 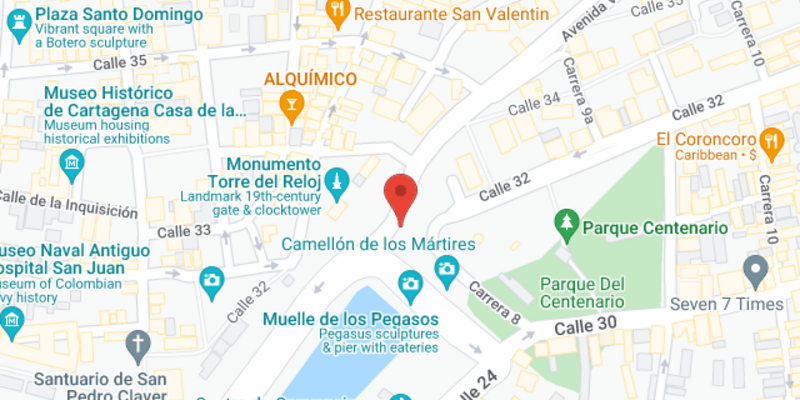 Minimum of attendees
There is no minimum number of people required for the tour.
Additional costs:
The tour does not require the payment of entrance fees or additional expenses.
Free cancellation
If you will not be able to attend the tour, please cancel your booking, otherwise the guide will be waiting for you.
Free tours
Colombia
Free tours en Cartagena, Colombia
When do you want to go?
Sun
Mon
Tue
Wed
Thu
Fri
Sat
Show more

Others cities to visit after Cartagena