This tour is the perfect way to introduce us to the fascinating history of Santiago de Compostela, allowing us to be enveloped by its monuments, churches, palaces and monasteries.

We will begin our walk in the famous Plaza do Obradoiro, located among all the powers that have erected and governed the city for centuries: the imposing Cathedral, the destination of tens of thousands of pilgrims each year; the Pazo de Raxoi, headquarters of the Compostela City Council; and the Pazo de San Xerome, rector of the University. Then we will immerse ourselves in the millennial streets of the old town to learn everything that the ancient stones of Compostela hide, in whose origins History and legend intermingle. Our path will take us to places such as the Hostal de los Reyes Católicos, the Monastery of San Martín Pinario, the squares of Quintana and Cervantes, and the second most visited place in the city: the Mercado de Abastos.

We will leave the old area through Porta Faxeira, and, after passing by the 2 Marías, we will enjoy one of the best views of Compostela from the Alameda viewpoint.

In the case of the english tour the umbrella is BLUE 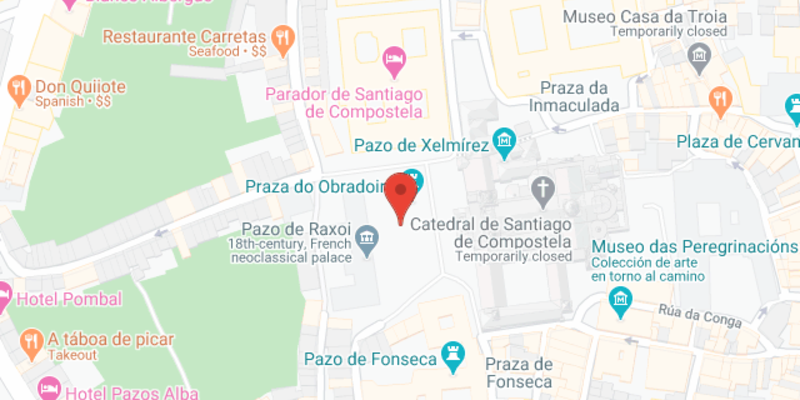 Minimum of attendees
There is no minimum number of people required for the tour.
Additional costs:
The tour does not require the payment of entrance fees or additional expenses.
Free cancellation
If you will not be able to attend the tour, please cancel your booking, otherwise the guide will be waiting for you.
Free tours
Spain
Free walking tours in Santiago de Compostela
When do you want to go?
Sun
Mon
Tue
Wed
Thu
Fri
Sat
Show more

Others cities to visit after Santiago de Compostela