GuruWalk in the Historic Center of Oviedo

I am an Asturian graduated in History who, since I was little, was very curious about it, in large part due to an animated series called Where is Carmen Sandiego?, In which a thief of historical goods traveled the world stealing them. I was always attracted to the idea of showing the story to people as I love sharing my hobby and seeing people happy to enthusiastically understand what they have in front of them. As a guide I worked in the city of Prague, guiding through its beautiful streets and historic neighborhoods, sharing knowledge and advising people on everything necessary to enjoy an unbeatable experience and always with a smile and the maximum willingness to please the visitor.

Welcome to my guruwalk in Oviedo! Here I leave you with a description of the buildings that you are going to see on the route as well as details and anecdotal events during the tour. The guide will always be willing to answer any questions related to the visit to give as much explanation as possible. The theme is markedly historical and cultural, but always from the perspective of interactive learning involving the visitors and encouraging them to interact with the guide. The goods to be treated are: -Cathedral of San Salvador de Oviedo: -Casa de Campomanes: -Monastery of San Pelayo: -Monastery of San Vicente: -Episcopal Palace: -Palace of Velarde: -Palace of Inclán Valdés: -City Hall and Plaza Mayor: -Church of San Isidoro: -Palacio del Duque del Parque: -Old comedy theater: -Historic Building of the University of Oviedo: -Palace of the Counts of Toreno: -Palacio de Camposagrado: -Palacio de Valdecarzana: -House de la Rúa: The proposed itinerary runs through the historic center of the city of Oviedo with a start and end at the same point, the Plaza de Alfonso II el Casto, in front of the Cathedral of Oviedo. It is a tour designed to always have a point of reference, since it revolves around this place walking in a clockwise direction. It is not very difficult, since it is practically entirely by pedestrian zone which favors that groups can walk occupying a large part of the road and without automobile dangers. It is designed to observe the entire oldest part of the city and access the available places during the route. 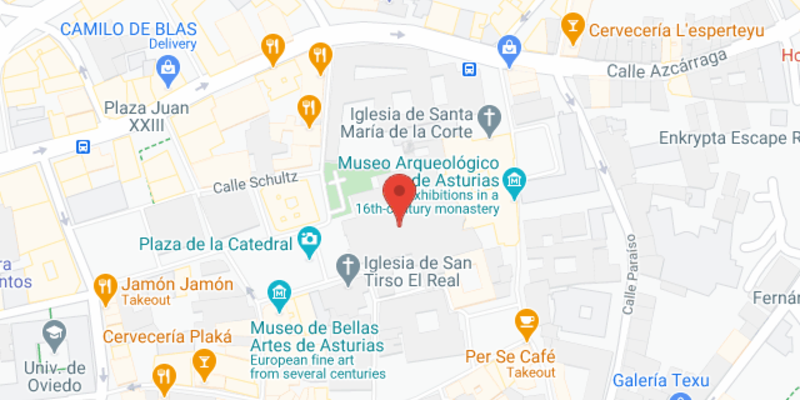 Minimum of attendees
There is no minimum number of people required for the tour.
Additional costs:
The tour does not require the payment of entrance fees or additional expenses.
Free cancellation
If you will not be able to attend the tour, please cancel your booking, otherwise the guide will be waiting for you.
Free tours
Spain
Free walking tours in Oviedo
When do you want to go?
Sun
Mon
Tue
Wed
Thu
Fri
Sat
Show more

Others cities to visit after Oviedo