So, I know something about the Ancient Romans. Lol!

I live in Rome since 1995, from that year never I left the Eternal city, being too beautiful and full of history, bread for my teeths.

I'm a pretty informative guy wishing to share as much as I can for the time we'll going to be together.

Being a historian, be sure I'm going to present the facts in ITS NAKED REALITY .. in good.... in bad.

To learn from the Past the stories must be told in the way that happened , with no "politically correct "attitude.

Remember,.... the history is already written... we're just the... Storytellers.

If we keep denying the dark skeletons from the closet, can't go forward and can't be better people.

In the psychology of human behavior, denialism is a person's choice to deny reality as a way to avoid a psychologically uncomfortable truth.

Mary Beard once wrote :"We inherited the Roman AMBIVALENCE questioning whether the Ends justify the Means.

The tears alongside the victory parades."

2000 years ago the roman historian Tacitus offers a image of fallout of Roman conquest. They make a DESERT and they call it PEACE.

Maybe the best description of Ancient Rome comes from HORACE .

In his verses we meet the living men and women of Rome and hear them talking as Romans talked.

The saucy slave, the vain poet, the pompous lecturer, the greedy philosopher, the gabbing bore, the businessman, the statesman, the streetwalker: this at last, we feel, is Rome. With homicidal playfulness he laughs at the gourmets who feast on delicacies and limp with gout.

MONEY - MADNESS, he concludes, is the basic disease of Rome.

Hope to see you soon guys!!!

SO, THE TOURS ARE GUIDED ONLY BY MY SELF. 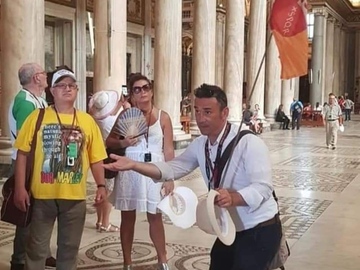 The DARK SIDE of the ancient Romans inside the Colosseum.

It was absolutely amazing tour! Marcius is a real professional who knows how to take care of people who visit Rome. He revealed a lot of secrets of Colosseum I had no idea about. It is difficult than most of the tours. More than I expected. After the tour I caught a passion for Roman history and kept searching more information about it on my own. He really knows how to get people interested in history and it worked well for me and my friend. He gave us a lot of literature we can read to get extra information about Rome and colosseum, as well as many tips on how to travel Rome better. I can definitely recommend a tour with him. Hope to see you again sometime 😊

Response from Marcius
Eyal, Thank you so much for the FIVE STARS REVIEW! Cheers!

Response from Marcius
Khryza, Thank you for the FIVE STARS review!

Marcius was AMAZING! We had a lot of fun with him and learned new things. We thank Marcius for a lovely tour. If you want to upgrade your time in Rome you should definitely take this tour. INCREDIBLE!

Response from Marcius
Shani, Thank you so much for the nice review! Glad that you had a good time. Well, this is my goal, trying to give you the best I can in the two hours together. Cheers!

Response from Marcius
Thank you Maya for your nice review! Cheers!