The Old City or Casco Viejo is the name given to the place where the city of Panama moved in 1673. This city, designed in a reticular way towards the four cardinal points, was characterized by the agility of its streets and shutters, which was worthy of being considered a classic model of an Indian city. It is located on a small peninsula, surrounded by a mantle of rocky cliffs, within the current hamlet of San Felipe. In 1997, the Old City of Panama is included in the UNESCO World Heritage List.

These are the places that we will see in this Tour:
1. Meeting point Plaza Catedral where the tour begins with the participants and at this point the story begins.
2. Visit to the Basilica Mayor Santa María la Antigua recently nominated by Pope Francis at WYD 2019.
3. Visit to the Museo de la Mola on the history of one of the Panamanian ethnic groups.
4. Visit the golden altar in the Church of San José and see one of the largest nativity scenes in Panama.
4. Visit to the Jesuit convent
5. Visit to the Arco Plano and all its history that gave the yes to the construction of the Panama Canal.
6. Plaza de Francia and sighting of the mouth of the Panama Canal in the Pacific Ocean.
7. Plaza Bolívar and its monuments such as the church of San Francisco de Asís
8. Visit of the Nativity in the Church of San Felipe Neri .
9. Panoramic view of the modern city and the old city
10. We end up at the place where the tour and sighting of the presidential house in Panama began.

Recommendations:
Biosecurity issues must also be maintained, such as always wearing a mask, a distance of 2 meters at some stops, physical contact is not visible.

Note: it is very good to bring a poncho or a cape in case of rain, sunscreen in case of sun and always water to hydrate, the weather in Panama is unpredictable, it is also good to bring a copy of your passport on your mobile with the stamp of ' entry to Panama and also the QR code of your vaccination card or a photo of it, if you take any drug bring it or tell the guide that you have to take the drug X at a certain time, a prudent person is worth x two! 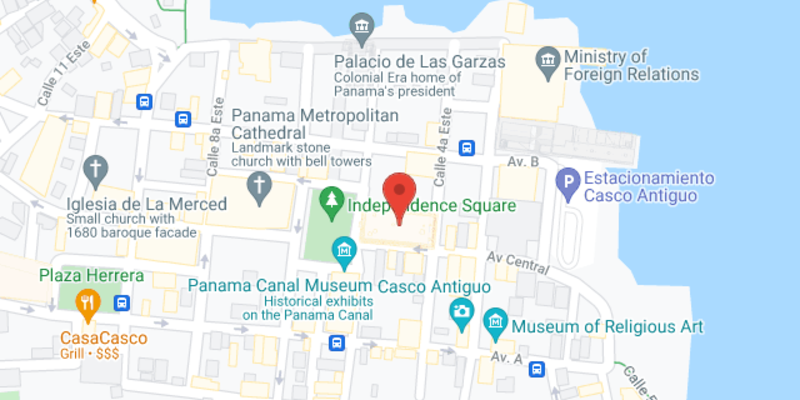 The guide did not show up

The guide did not show up

Free cancellation
If you will not be able to attend the tour, please cancel your booking, otherwise the guide will be waiting for you.
Free tours
Panama
Free walking tours in Panama City
When do you want to go?
Sun
Mon
Tue
Wed
Thu
Fri
Sat
Show more

Others cities to visit after Panama City