Free tour in the former KGB prison in Vilnius

My name is Lukas. I love my city Vilnius! I'll be happy to walk around with you and show you places, because I've been living here my whole life and I know every single street and courtyard of this city. Since 2018 I work in a local radio where I tell stories and interesting facts from our past. I have collected a lot of such stories and I want to share it with you. I'm looking forward to having you as my guests! I am working as English and Norwegian speaking guide in Lithuania. My guiding experience is almost 10 years and I can offer many different tours (not only traditional) in Vilnius, Kaunas, Trakai and other cities. Let me know what you are expecting and I will meet your expectations. We can mix city tour with visiting museums. I know good local restaurants, SPA centers, hotels and I can't recommend them for you. It is interesting to stop for traditional food tasting during the excursion. We can also do one or two days tour with bikes in the beautiful Lithuanian nature or to visit the Hill Of Crosses with about 100 000 crosses on the hill. I am a licensed guide in the Palace of the Grand Dukes of Lithuania, KGB museum (Museum of Occupation and Freedom Fights, Gediminas castle, Trakai historical museum in Trakai castle. I can drive a car and usually use my vehicle. I have 16 years driving experience. Let me know if you are thinking to visit the Hill of Crosses, Kaunas, Pakruojis manor, Beekeeping museums in our national parks, the first capital of Lithuania- Kernave, Curonian spit, SPA town Druskininkai or another beautiful place of our country. Then I will make an offer for you according your expectations.

The museum is located in the former KGB building, where the crimes of the Soviet regime for fifty years were planned and executed.

Take this interesting tour in the former KGB prison with a professional English and Norwegian-speaking guide. During the tour, you will be able to visit: the former KGB prison, the execution chamber, modern exhibits on resistance movements and deportations, and more . The guided tour lasts about 1 hour, but you can stay after the museum visit to see the photographs and the exhibition on the deportations, the KGB, the resistance movement in Lithuania.

A chamber of 19 is dedicated to the Jewish Holocaust because between 1941 and 1944 the building was used as the German Gestapo.

Useful information:
- The entrance ticket is not included in the tour. Extra cost € 6 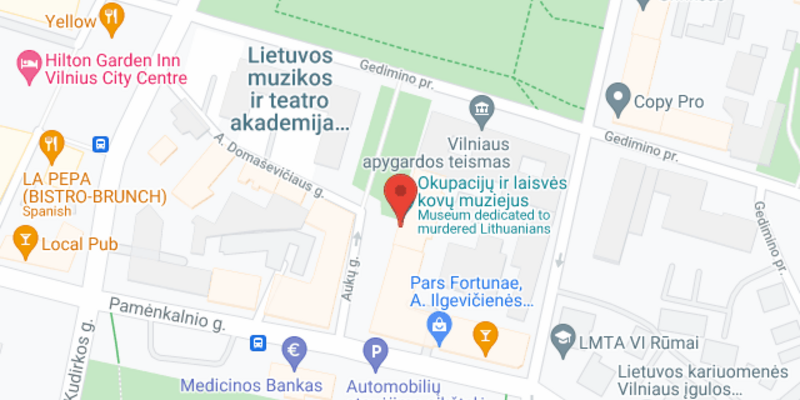 Lukas was a fantastic guide! Very knowledgeable about the history of the KGB museum. Would book a tour with him again!

Lukas was a fantastic guide! Very knowledgeable about the history of the KGB museum. Would book a tour with him again!

Minimum of attendees
There is no minimum number of people required for the tour.
Additional costs:
The tour requires the payment of entrance fees or additional expenses.
Free cancellation
If you will not be able to attend the tour, please cancel your booking, otherwise the guide will be waiting for you.
Free tours
Lithuania
Free walking tours in Vilnius
When do you want to go?
Sun
Mon
Tue
Wed
Thu
Fri
Sat
Show more

Others cities to visit after Vilnius