Hi there! I am a tour guide who has been showing people the great cities of Chicago, Los Angeles and now Atlanta. I love cities, history and enjoying excellent craft beer in the city.

You will find yourself in front of the Olympic Rings heralding the entrance to Centennial Park.  As you waltz down the park and see, quilt by quilt, how this worldwide event came to fruition in Atlanta, you will hear the tragic story of the bombing that occurred one fateful night.

From there, you will be in tourist ground zero.  All within a 3 minute walk you can explore the Georgia Aquarium, The World of Coca-Cola, and the National Civil Rights Museum (the highest ranked attraction on Tripadvisor.)  You'll get insight as to how Atlanta became the genesis of the Civil Rights Movement and learn about the bizarre beginnings of the most famous soft drink in the world.

From there, you'll leave the comfort of the park and explore a bit of downtown Atlanta.  You will be welcomed by the Skyview: our signature Ferris Wheel, and glimpse the marquee of The Tabernacle, a popular concert hall.  Just a bit further down you'll learn about Ted Turner's private life, CNN, and his Montana Grill.

By the end of this tour you'll be able to answer such burning questions as:

And lots more.  Come experience it for yourself and discover why Centennial Park is at the top of every travelers bucket list in Atlanta! 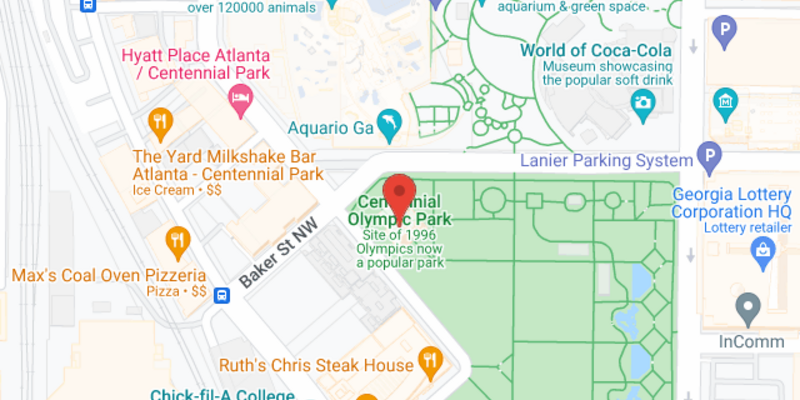 Chloe 21 Aug 2022
Verified booking
Travelled in couple - Aug 2022
This tour does very much focus on the Olympics, which was great, but there is alsojust enough information that isn't linked to it for it to not become overwhelming.

Alfonso 23 May 2022
Atlanta
Verified booking
Travelled in couple - May 2022
Everything was excellent!
Show 3 reviews

This tour does very much focus on the Olympics, which was great, but there is alsojust enough information that isn't linked to it for it to not become overwhelming.

Phil is very knowledgeable and friendly! He really did upgrade my stay in Atlanta. I highly recommend his tour!

Minimum of attendees
A minimum of 4 people is required for the tour.
Additional costs:
The tour does not require the payment of entrance fees or additional expenses.
Free cancellation
If you will not be able to attend the tour, please cancel your booking, otherwise the guide will be waiting for you.
Payment methods
Electronic or credit card payment is accepted.
Free tours
United States
Free walking tours in Atlanta
When do you want to go?
Sun
Mon
Tue
Wed
Thu
Fri
Sat
Show more

Others cities to visit after Atlanta