I was born and raised on the south side of the city. Always with an enquiring mind I was attracted to everything in the city centre: Who built this? What was that used for? Why was that street demolished? Why do I ask so many questions (haha)? Although I never studied history at school there was always something about the city's culture and it's people that seemed different from anywhere else. The areas of deprivation seemed almost more fascinating than the affluent parts of town and I just loved to wander around the streets looking for the everyday things that most people took for granted. I'm still nostalgic for the things that have long disappeared, from tramcars to steam trains, from gas lighting to pre-decimal money. But I love the new Glasgow too and am proud to belong to the city and to welcome tourists and visitors from all over the world. I am not a history teacher so my tours are not like lectures. Think of it as a great, relaxed walk round town with an old friend. Welcome to Glasgow.

Once at the very heart of the Industrial Revolution this is a 2.30 hours journey around a city with some of the finest Victorian architecture in the world. Learn how Glasgow grew from a tiny fishing village to become the second city of the British Empire. Hear how the merchants of the old town became wealthy via the lucrative tobacco trade, how it all went wrong....and how they bounced back again!

Follow the journey of the city as it grew into a handsome market town, became the shipbuilding capital of the world, descended into squalor during the industrial boom and eventually became a city of culture, heritage, arts and technology that it is today.

Fantastic bars, restaurants and the best shopping in the UK outside of London awaits you....and come evening the music and club scene is second to none.

You will see the iconic buildings and landmarks of the city centre including the imposing Central Station & Hotel, the River Clyde, Glasgow Green, St.Andrews in the Square Church, the Tolbooth and Tron Steeples, the Victorian Fish and Fruit Market buildings , the 12th century Glasgow Cathedral and adjacent Necropolis, the Gallery of Modern Art and the spectacular City Chambers building in the heart of the city at George Square.

Nothing is hidden, so you will see the good bits, the bad bits, the funny bits (me and my jokes) and even learn to speak a few phrases that you will only hear in Glasgow.

I look forward to meeting you really soon.....and remember, this is Scotland so do remember to bring both suntan lotion and a raincoat!! 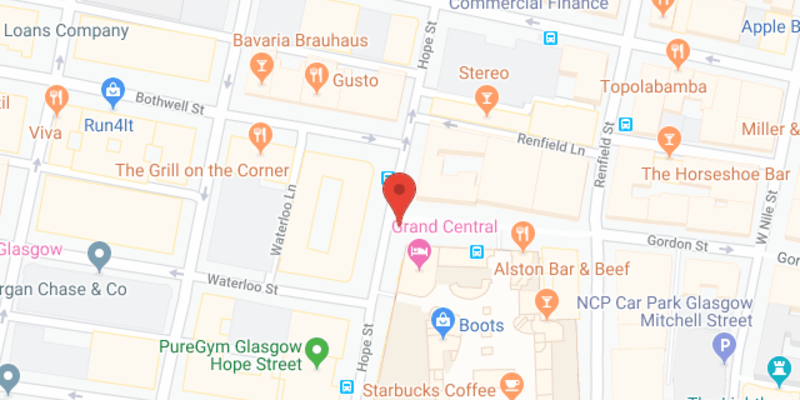 Melodie 15 Nov 2022
Kirkliston
Verified booking
Travelled in group - Nov 2022
This was a very fun and informative tour. Even though I have been living in Scotland since 2016, I still learned a lot of new information. Iain was a great tour guide.

Chris 11 Nov 2022
Lytham St Annes
Verified booking
Travelled in couple - Nov 2022
Ian was a great guide with a wealth of information about the city all delivered with an easy manner and good sense of humour. Would definitely recommend.

Joana 07 Nov 2022
Lisbon
Verified booking
Travelled in couple - Oct 2022
Ian was there on time and was very nice. It was also knowledgeable about the city and some places that we went by, trying to connect with the group. The lenght of the tour and the group size were appropriate, I would have expected some more interesting stops, but I think that is the city's fault :) as it does not have much "touristic" sightseeing to do.

Excellent tour!! Lots of information about Glasgow!! Recommend it!!

Response from Iain
Hi Marcella, Thanks so much for your great review. I am delighted you enjoyed it and hope the rest of your visit was also memorable for you.

This was a very fun and informative tour. Even though I have been living in Scotland since 2016, I still learned a lot of new information. Iain was a great tour guide.

Response from Iain
Hi Melodie, Thanks so much for that great review and I'm glad you had a good time. As you say, there is always something new to learn or discover - I still find new material and points of interest in places that I have passed hundreds of times😃

Ian was a great guide with a wealth of information about the city all delivered with an easy manner and good sense of humour. Would definitely recommend.

Response from Iain
Hi Chris, Thanks so much for that review. I am delighted that you both enjoyed the tour and hope the rest of your stay was great too. Cheers Iain

Ian was there on time and was very nice. It was also knowledgeable about the city and some places that we went by, trying to connect with the group. The lenght of the tour and the group size were appropriate, I would have expected some more interesting stops, but I think that is the city's fault :) as it does not have much "touristic" sightseeing to do.

Response from Iain
Hi Joana, Thanks for taking the time to review your recent tour in Glasgow. While I am happy that you did generally enjoy the tour I am also disappointed that you felt Glasgow does not have enough interesting things to see. It is a fact of life that it is not possible to fully satisfy all of the people all of the time but the reason my tours last longer than other guides doing similar tours in the area is that I cover a wider area and show more places that I hope people will find to be of interest. More stops mean more descriptions, explanations and anecdotes. A lot of the places of interest cannot be included in the tour as they are simply too far from the core area to be covered on foot within the alloted time, but they are referred to at the end of the tour so guests may check them out by themselves if they have enough time in Glasgow. I fully accept we all have our own ideas of what constitutes "interesting" and while the tour in its present format is widely favoured by guests I am always willing to review the content and listen to any suggestions put forward by visitors. Please feel free to contact me if there is anything more that I could have done to make your tour with me perfect. All the best, Iain

Response from Iain
Hi Martin, Thanks for the review and for coming along on such a miserable wet day. It was great to meet you and hear your philosophies in that typically Aussie "don't give a s**t" sense of humour😃. Have a safe homeward journey. Cheers Iain

Free cancellation
If you will not be able to attend the tour, please cancel your booking, otherwise the guide will be waiting for you.
Free tours
United Kingdom
Free walking tours in Glasgow
When do you want to go?
Sun
Mon
Tue
Wed
Thu
Fri
Sat
Show more

Others cities to visit after Glasgow