We are a team of tour guides with a passion for meaningful history and storytelling. We've all been giving tours in Barcelona for many years and will help you understand what makes the city and its sites unique!

Get to know and understand Sagrada Familia and Gaudi, from his brilliant designs to its still ongoing construction.

Beyond just the history of the building, we'll cover Gaudi's life and inspirations and the genius architectural design strategies he employed.

Gaudi's was a (mad) genius with a unique vision. Every sculpture, tower and detail of Sagrada Familia has a story behind it.

On this 1h free tour of Sagrada Familia you'll learn about the history, symbolism, Gaudi's life, inspiration and death, inspirations and how Gaudi's  vision is being realized now.

With the help of pictures, models and the stories and inspirations you'll get a complete understanding of why Sagrada is considered one of the new Wonders of the World.

Discover all the stories, secrets and deeper meanings behind Barcelona's most iconic landmark!

Julia 21 Nov 2022
Vienna
Verified booking
Travelled in couple - Nov 2022
Nice guide, who was very open to answer questions. He described the life and creations of Gaudi and we decided we have to the inside of the Sagrada Familia. A nice combination of the outside and inside of the church.

erin 05 Nov 2022
Mexico City
Verified booking
Travelled in couple - Nov 2022
Awesome tour, Yanni is so fun and has some great info. I highly recommend this. This comes from someone who is not a religious person, but the tour was so cool I ended up learning stuff about the Catholic church that I was reluctant in learning.

yin 22 Oct 2022
Verified booking
Travelled in couple - Oct 2022
Onno had a wealth of knowledge and I would definitely pay to have him guide me outside and also inside …It may be worth thinking about a specialist in-depth tour guide who can display all their knowledge to tourists who want to hear all that is on offer. Great job and thank you.

Maria 15 Oct 2022
Onno was a great Guru who had lots of fun facts about the Sagrada Familia and welcomed questions that enriched the experience. Highly recommended.
Show 104 reviews

Nice guide, who was very open to answer questions. He described the life and creations of Gaudi and we decided we have to the inside of the Sagrada Familia. A nice combination of the outside and inside of the church.

Minimum of attendees
There is no minimum number of people required for the tour.
Additional costs:
The tour does not require the payment of entrance fees or additional expenses.
Free cancellation
If you will not be able to attend the tour, please cancel your booking, otherwise the guide will be waiting for you.
Free tours
Spain
Free walking tours in Barcelona
When do you want to go?
Sun
Mon
Tue
Wed
Thu
Fri
Sat
Show more 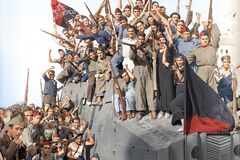 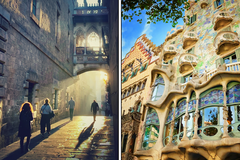