Turn your visit to Seville into an adventure full of emotions. Come and enjoy a different tour in which you not only see a destination, but feel it! You will find yourself integrated into the lives and cultures of the people who passed through here, and you will remember it forever as a great experience. Are you going to miss it?.

Turn your visit to Seville into an adventure full of emotions. Come and enjoy a different tour in which you not only see a destination, but feel it! You will find yourself integrated into the lives and cultures of the people who passed through here, and you will remember it forever as a great experience. Are you going to miss it?.

Free Tour to see and get to know Seville from top to bottom .
It is a complete tour to discover its most important monuments , its most beautiful streets and squares , and its most popular neighborhoods .

✔ Avda. of the Constitution.

WHAT WILL WE TELL YOU? ☂
Be amazed to see the guardian faces , a mixture of humans and fantastic beings that protected the city, or Hercules , founder of Seville, a man of superhuman strength. Meet San Isidoro, the most cultured man in our history, Fernando III the most popular patron and king, his son Alfonso X who was amazed by the tallest tower ever seen. There will be Julius Caesar, the most famous Roman , Trajan and Hadrian who left these lands to become emperors of all of Rome , and characters as famous as Cervantes , who lived, loved, enjoyed and suffered in the Seville of the rich, very rich, and poor, very poor.

We will put you to the test to choose between being a prisoner or a beggar , you will feel the Al-Andalus Almohad that transformed Seville into a great city and we will see the collapse of the Giralda , as well as a unique Hamman . We will feel the tension of the Inquisition in the gloomy Castle of San Jorge , where even the first smoker in Seville ended up imprisoned, and we will approach the devastating 17th century when 50% of the Sevillian population died.

In silence we will approach the fence that separated the ghetto from the Jews who lived here , those who wore a red sign on their right shoulder.

You will be surprised by the most unknown Tower in Seville , so hidden that it is visible only by the most daring. You will hear the only 7 bells that are rung by hand , and you will see the only crucified Virgin , with one of the cruelest legends!!. There will be Visigothic remains, embossed arabesques full of imagination and fantasy made by blind artisans, and stories to laugh about when, in the middle of Sevillian baroque, the first great marketing campaign in history was born.

We will cross the Guadalquivir with its famous algartado mud to reach the trendy neighborhood!!, where one day the first gypsy tribes settled , where the Pasmo de Triana became a revolutionary bullfighter , and where they continue to use that of don't wear flamenco! ! . You will be surprised by its tiled facades , and curiosities of characters such as Vicent van Gogh, who some claimed lived in Triana.
We will not forget our two major festivals declared of International Tourist Interest , and we will tell you the tapas you must try to eat Seville.

You will also learn what those mats are that hang so much from the balconies, and who came up with the idea of making a round bullring when they were all square. And… you will not leave without meeting the first google in history who lived among us, taking all the luck of Seville by finding the hidden third hand of a Saint, or knowing the time in the most spectacular sundial you have ever seen.

There are a thousand ways to get to know Seville, with this Free Tour you will learn to interpret all of them. Traces of past Kings · Traditions that endure · Stories of great loves · Cruelties difficult to overcome · Art and the atmosphere of the South. A meaningful walk to make the most of Seville. If you come repeat!

Hey you!! ☛ Sign up and you will enjoy Seville as you deserve.

☀ We only make stops in the shade all the way .

How to find me: You will see us at Plaza de San Francisco 17 -At the fountain in front of the Bank of Spain-

Seville for the curious "Christian, Muslim and Jewish Legends and Enigmas". 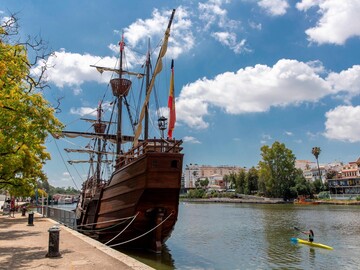