Free tour of Imperial Rome and the external Colosseum

Its magic, its beauty, its majesty and its wonderful history did not allow us to leave it! Rome city like no other, has attracted us to it to receive its visitors and take them to know the secrets that she wants to tell them. For this reason we, very prepared women, professionals and above all fascinated by Rome its charms, its experiences, coexistence and disagreements we have accepted the mission of making you fall in love with her and that your journey through her bosom is reflected in your heart and your memory. The Eternal City full of tales of love, terror, blood and intrigues, full of power struggles, of ingenuity, of perseverance but also of great strength gave us the mission to show you every corner with its history and for that we have prepared ourselves very jealously for you. Come enjoy the best Free Tour of the Eternal City! With us you can enjoy this beautiful city without the nightmare of the ranks with our Premium Tours.

Julio César, Augusto Octavio, Nero, Caligola or Traiano are among the other men who have marked history, some for their contributions to HUMANITY, others for their perversity and madness !! Their stories still make us curious! On this tour we want to take you for a walk through the ETERNAL CITY and give you a little bit of its HISTORY, full of intrigue, betrayal and a lot of blood which in turn allowed the GREAT ROMAN EMPIRE to arise in it !! The story will begin in the majestic Flavian Antitheatre better known as the Colosseum! To enter one of the most beautiful streets in the world and show them the legacy that the great emperors left us, the path of the Imperial Forums where the fathers of the Roman Empire left their mark. The Forum of Nerva, the Forum of Augustus, the Forum of Julius Caesar and the Forum of Trajan with its beautiful column and its Great Market. We will cross Piazza Venezia and its importance in Italian fascism to contemplate the monument to Vittorio Emanuele and we will culminate in the large square designed by the great Michelangelo Buonarroti El Campidoglio where they will be able to see the famous Lupa that feeds Romulus and Remus. The Rome of the emperors. 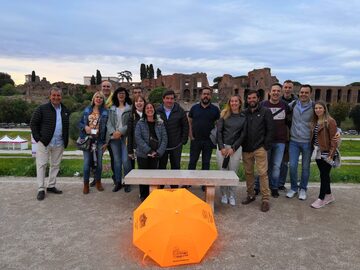