My name is Edin Ogrešević. I graduated Financial Accounting and I am local tour guide in Sarajevo for last 10 years. I am founder of Meet Bosnia Tours, leading tour operator in Sarajevo which is rated #1 in Sarajevo according to TripAdvisor platform. Meet Bosnia Tours is a group of very young but educated and enthusiastic individuals who share love and knowledge for their country so much so that they decided to share it with the world. Sarajevo Tours are our speciality. Our Mission is to show the world all the hidden gems of Bosnia and Herzegovina, be it natural, historical or religious. We are giving special attention to gastro tourism, so in cooperation with the most prominent restaurants we are offering best gastro experience and introduction to local gourmet traditions. Our tours are available in many languages such as English, French, German, Turkish ...

Join us on our free tour of Sarajevo Essential.
This is one of the best ways to get to know our beautiful capital: Sarajevo.

Mainly, we will walk around Baščaršija , the heart of Sarajevo's old town. This is the area where most of Sarajevo's recognizable landmarks are located and then continue to the modern part of the city where you will find other imposing buildings that represent the pride of Sarajevo.

On our free tour of Sarajevo, you will learn more about the rich history, diverse cultures and delicious cuisine of Sarajevo and our country, Bosnia and Herzegovina.

During our Free Walking Tour we will see the Old Orthodox Church, one of the oldest religious objects in Sarajevo. Above all, the most recognizable landmark of Sarajevo is Sebilj, a wooden fountain located on Baščaršija Square. The legend says that drinking water from here means that you will certainly come back to this city in the future. Likewise, you will find the oldest streets of Sarajevo – Kazandziluk Street and walk through Baščaršija, the liveliest part of the city.

Later on, by visiting old Caravan Saray, you will really have a strong feeling of going centuries back to time.

Moreover, during the Free Walking Tour in Sarajevo, you will also see the famous Gazi Husrev-bey Mosque. Nearby this extraordinary beautiful mosque, you will see a unique clock tower famous for showing a very unusual time for the modern world. Furthermore, we will walk nearby the oldest shopping center of Sarajevo, the “Bezistan” – old bazaar from the Ottoman period.

The Sarajevo City Hall is the most recognizable Austro-Hungarian-era building in Bosnia. Since 1949 it served as the National and University Library and now it is the seat of the city council once again.

Additionally, you will hear the story of the Sarajevo Jewish community existing for almost five centuries. The Old Jewish Temple is within the walking distance of Christian and Muslim religious objects. Today it is an important museum related to Balkan Jewish traditions and customs.

After the spot that says “Sarajevo Meeting of Cultures”  Sarajevo Free Walking Tour continues westward. Ferhadija street is related to the arrival of the Habsburg monarchy. For instance, one of the iconic buildings on Ferhadija street is the Catholic Cathedral nearby which you will see the statue of Pope John Paul II. Also, we will talk about Sarajevo Roses and famous people that lived here.

Furthermore, we will see the first modern hotel in Sarajevo and hear the stories of the first Waltz dance and celebrities that stayed here. Our recommendation is to drink Bosnian coffee and eat Sacher cake in this place where East meets West. Then the tour continues to the famous Latin Bridge, Franz-Ferdinand’s assassination site.

Most importantly, in our  Free Walking Tour in Sarajevo, you will have passionate and young guides who were born here. They will be happy to show you even the secret spots of their town where most tourists wouldn’t go themselves. Also, at the end of the Free Walking Tour Sarajevo, our guide will give you notes with local tips which were carefully selected by our company.

Finally, the tour ends in our office, the same place where it starts. 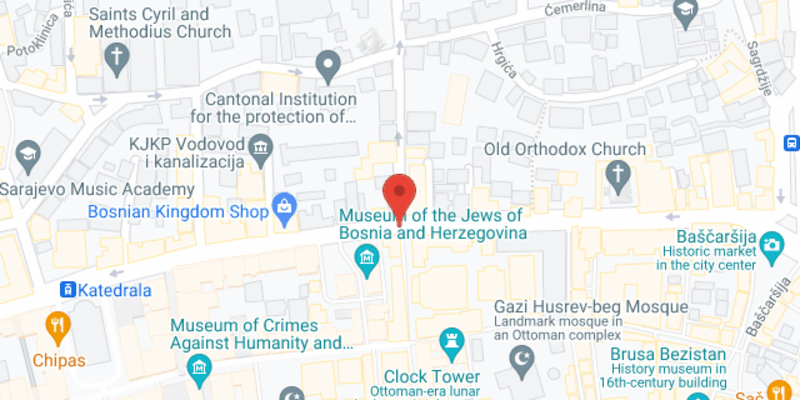 My friend and I took the tour and it was so informative and our guide was so lovely!! She truly went above and beyond to tell us everything she knew. She was very pass...

Very informative tour with a good mix of older and more recent history and some useful recommendations for the rest of your day. The guide had a friendly and engaging ...

My friend and I took the tour and it was so informative and our guide was so lovely!! She truly went above and beyond to tell us everything she knew. She was very passionate about what she was telling us and it was very engaging. Absolutely loved it!! A must do in Sarajevo.

Very informative tour with a good mix of older and more recent history and some useful recommendations for the rest of your day. The guide had a friendly and engaging style and was open to answering all questions. Recommended.

Minimum of attendees
There is no minimum number of people required for the tour.
Additional costs:
The tour does not require the payment of entrance fees or additional expenses.
Free cancellation
If you will not be able to attend the tour, please cancel your booking, otherwise the guide will be waiting for you.
Free tours
Bosnia and Herzegovina
Free walking tours in Sarajevo
When do you want to go?
Sun
Mon
Tue
Wed
Thu
Fri
Sat
Show more

Others cities to visit after Sarajevo