United to the capital of Tenerife, La Laguna stands as its twin city.

Do you want to know what has historically been the intellectual center of the Canary Islands and the de facto capital of the archipelago until 1833?

Let's go into La Laguna, or "Aguere" for the aborigines of the island! This Canarian jewel can boast the well - earned title of World Heritage Site . His street map was organized in the form of a checkerboard and his plans served as a pilot project for the construction of many new cities in newly conquered American territory.

University City and with a partying youthful atmosphere, there is nothing like strolling through its wide pedestrian streets, with countless gossip and anecdotes that will fascinate you. This enigmatic and colorful city was the capital of the island until the 19th century and thanks to this it has an extraordinary architectural and artistic heritage.

The Plaza de la Milagrosa will welcome us, so called since many plague patients were treated in this area during the 16th century. We will explain the history behind the old Convent of Santo Domingo de Guzmán , where a renowned Canarian pirate was buried. Around the Plaza del Adelantado are key buildings in the history of the city.

On our tour we will stop at the Town Hall , the first seat of the Cabildo to be built. The route will be dotted with several "Houses", each of which will reveal an interesting aspect of our culture: The House of the General Captains and the House of the Corregidor, The House of the Alhóndiga, the Cayetano Gómez Felipe House Museum, the Houses Salazar, Lercaro and Montañés…

We will cross the main traffic routes and commercial areas such as Calle Obispo Rey Redondo, La Carrera or Calle Herradores until we reach the central point of the historic center, with the beautiful Cathedral of Nuestra Señora de los Remedios . We will also get to know the Matriz Parish of Our Lady of the Conception . Do you want to know what “Matrix” refers to? We tell you!

We will not say goodbye without visiting the Church and Old Convent of San Agustín, the Plaza de la Junta Suprema de Canarias, the Municipal Library or the Convent of Santa Clara , the first of a female character in the entire archipelago. We will also show you the Plaza del Cristo and the Municipal Market , where the most important local festivals are celebrated every September.

Come to know this magical city, where time seems to have stopped between stories of pirates, legends, gardens and palaces . 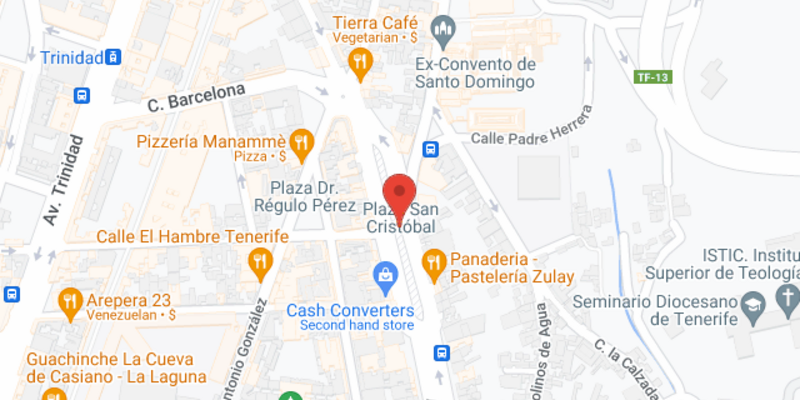 Alan 31 Jan 2023
Dunblane
Verified booking
Travelled in group - Jan 2023
As we live on the island we regularly take visitors to la Laguna for a walking tour. Without doubt this was by far the best!

Ioana 25 Jan 2023
Verified booking
Travelled alone - Jan 2023
Amazing amazing amazing tour with David! He really changed my outlook on the island, delivered a wealth of information in a fun way and had a very logical and cool route for the day. Thank you for all the tips and music ideas! It was a wonderful day!

cris 15 Jan 2023
Berlin
Verified booking
Travelled in couple - Jan 2023
David was simply a great Guru, can only recommend you to follow him through the streets of La Laguna.

As we live on the island we regularly take visitors to la Laguna for a walking tour. Without doubt this was by far the best!

Amazing amazing amazing tour with David! He really changed my outlook on the island, delivered a wealth of information in a fun way and had a very logical and cool route for the day. Thank you for all the tips and music ideas! It was a wonderful day!

David was simply a great Guru, can only recommend you to follow him through the streets of La Laguna.

Minimum of attendees
A minimum of 4 people is required for the tour.
Additional costs:
The tour does not require the payment of entrance fees or additional expenses.
Free cancellation
If you will not be able to attend the tour, please cancel your booking, otherwise the guide will be waiting for you.
Free tours
Spain
Free walking tours in San Cristóbal de La Laguna
When do you want to go?
Sun
Mon
Tue
Wed
Thu
Fri
Sat
Show more