Hello, My name is Adis! Adis Hamzic - Licensed Tour Guide in Sarajevo I am a Tour Guide in Sarajevo, a place where I was born and lived my entire life. I'm professional and licensed Tour Guide. I'm passionate and love history. I offer my clients custom tour services of tours and excursions. Besides. My job is to show you my city and introduce you to Sarajevo, a place where east meets west. Sarajevo is one of the most diverse cities in Europe, a city rich with history, love and tolerance! Over the past years, I had privileges to guide many travelers through my city and make them very happy. If you are planning on visiting my city Sarajevo, please let me know and I will make sure to take you to all important places and introduce you to city's rich history, cultures, traditions, and religions. I'm looking forward to meet you and make your time in Sarajevo one unforgettable experience!

The free tour starts at our office located just across the street from the main square Baščaršija next to the tram station, the address is “Mula Mustafe Bašeskije 65”. The guide will have a Bosnian flag as a sign of recognition.

During our free walking tour, you will be able to fulfill your visit to the capital city of Bosnia and Herzegovina, Sarajevo, where we will visit historically and culturally important places and monuments. Sarajevo is one of the most miscellaneous cities in Europe, due to its religious, cultural and historical diversity. It’s a city with rich history, love, and tolerance, in which the east meets the west!
Every tour is guided by professional and licensed tour guides, who are always at your disposal for any kind of questions.

We will get to know the most hidden corners of Sarajevo. On our tour, we will visit the city’s main monuments, such as catholic and orthodox churches, mosques, Jewish synagogue, bridges, city hall, and many other monuments of historical and cultural importance. Tours are always enriched by the best anecdotes and interesting stories from our local guide, and above all, we will spend an unforgettable time on this tour intertwined with good humor.

⭐   Orthodox church of the Nativity of the Theotokos

⭐   Cathedral of the Sacred Heart

In this 2-hour tour, you will experience the real soul of Sarajevo during the centuries. The old town of Sarajevo hides one of the best preserved oriental Ottoman treasures in all of Europe. We will review more than 500 years of history, starting from the establishment of the city during the Ottoman Empire, then going through the period of the Austro-Hungarian Empire, Yugoslavian era until we reach today's Sarajevo.

Our starting point is the main square Baščaršija from which the story of the urbanization and cultural and economic development of the capital city Sarajevo begins. Baščaršija represents the historical and cultural center of Sarajevo that still nowadays cherishes a tradition over 500 years old. With Sebilj, as the most recognizable landmark and fountain on Baščaršija square, and the story of water, after you drink it you will surely return to Sarajevo again.

Meanwhile, we are approaching the turbulent history of the Sarajevo City Hall “Vijećnica”, which is still considered a symbol of the city of Sarajevo since the 19th century. The presence of great symbolism and a mixture of architectural styles in the Austro-Hungarian period make it a unique building in the oriental part of the town. With the Yugoslavian epoch, it becomes the National and University Library in 1949, while the recent historical events left a significant mark on the history of the city, that's why it's worth visiting.

At the same time, an indispensable part of our tour is the Spite house, which in the truest sense represents the great story of the spirit of Sarajevo’s habitants.

As we continue, we will visit the Emperor’s mosque, an indispensable part of the Islamic tradition of Sarajevo, which is the first mosque built after the fall of Bosnia under the Ottoman Empire and was especially dedicated in honor of Sultan Mehmed II the Conqueror.

Nevertheless, you will discover the story of the Latin bridge and beginnings of the World War I, as a turning point in modern history. We will visit the site of the assassination of the Archduke Franz Ferdinand of Austria since it was the final event that precipitated World War I.

On our tour, we will walk by the Gazi Husrev Bey’s Bezistan, which is an endless detail that tells the story of the commercial life of the citizens during the Ottoman period. To this day, Bezistan as a shopping center cherishes its commercial tradition since the 16th century.

The city’s turbulent history and reputation for multicultural, multiethnic, and multireligious tolerance, where the world’s major monotheistic religions coexist for centuries, make this tour a must-see.

In the sequent part of the tour, we will visit Orthodox Cathedral of the Nativity of the Theotokos, Catholic Cathedral “Sacred Heart”, Old Jewish synagogue, Gazi Husrev-Bey’s Mosque, and Clock Tower located in the very heart of the city. Although built in different eras, their significance is inevitable for the history and tradition of the city. The intertwined story of different peoples, religions, and ethnic backgrounds located in the strict center of the city, explains the title of Sarajevo as “European Jerusalem”. Not just that, but all of them are only about 500m walking distance away!

In front of the Cathedral “Sacred Heart”, we will talk about Sarajevo roses – symbolic roses and leftovers of the Sarajevo siege. Why is it important to remember the citizens of Sarajevo and why the city still has scars from the most painful war events in the most recent history.

On the other hand, we will walk next to Sarajevo Meeting of Cultures spot that has a symbolic meaning due to the cultural and religious influences which marked Sarajevo as a place where the east meets the west.

After visiting Gazi Husrev Bey’s Mosque, clock tower, tomb and madrasa, the tour ends in the main square “Baščaršija” where it started.

At the end of the tour, our local tour guides will give you advice on local food and drinks, as well as recommendations for places and destinations to visit. Don’t hesitate to ask questions or recommendations, generosity and warmth are part of our culture.

If preferred, you may ask for Bosnian coffee (optional) and a pleasant chat with our local tour guide.

Come and join us on the tour! 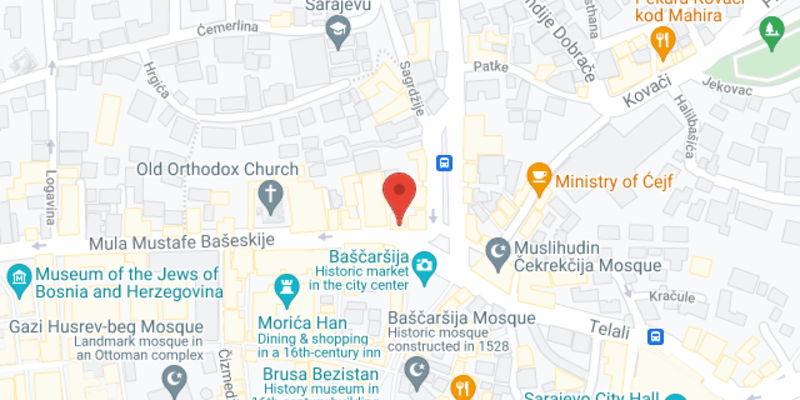 Matthew 29 Nov 2022
New York
Verified booking
Travelled in couple - Nov 2022
Great tour and answered all of our questions and gave a more custom tailored tour based on our questions. Was very helpful and funny and gave some great recommendations. Would definitely recommend this tour!

Tomas 29 Nov 2022
Adelaide
Verified booking
Travelled alone - Nov 2022
Adis provides a comprehensive and informative tour of the highlights of Sarajevo. Highly recommended, especially if you are interested in history.

Ilyssa 22 Nov 2022
New York
Verified booking
Travelled in group - Nov 2022
Adis was absolutely incredible and exceeded my group’s every expectation. He was so knowledgeable and informative and was open to all of our questions. I learned more about the history and culture of Bosnia in this tour than in any museum I have visited or in any book or article I have read. He provided incredible local recommendations and was incredibly warm, funny, and kind. We would absolutely recommend this tour to anyone visiting Sarajevo!

Vitt... 19 Nov 2022
Bari
Verified booking
Travelled alone - Nov 2022
Tour with Adis was nice, it went through the main interesting places in Sarajevo city center, providing useful information. Another valuable thing: he advised us about the best places for eating, and having tried those ones and other ones I would say they were valuable suggestions. There is some room for improvement regarding the involvement of the audience.

Natasha 16 Nov 2022
Luton
Verified booking
Travelled in couple - Nov 2022
Finally did our first walking tour ever today, after following a recommendation from some friends to do one in Sarajevo. We are so glad we did!! No-one else turned up, so it was just my boyfriend and I, which turned out to be great! Adis was really friendly, funny, knowledgeable and full of good intelligent conversation! He's a historian, and shared lots of facts on our 2 hour walk! He points out things which people may not even notice, which was fascinating. We talked about recent history, ottoman empire, war, assassination, current affairs etc, which all also gave everything I read about in the Museum of War and Genocide (highly recommend) some perspective. Definitely choose this tour - you won't regret it!!!
Show 497 reviews

Great tour and answered all of our questions and gave a more custom tailored tour based on our questions. Was very helpful and funny and gave some great recommendations. Would definitely recommend this tour!

Adis provides a comprehensive and informative tour of the highlights of Sarajevo. Highly recommended, especially if you are interested in history.

Response from Adis
Deal Willa, Thank you very much! Adis

Adis was absolutely incredible and exceeded my group’s every expectation. He was so knowledgeable and informative and was open to all of our questions. I learned more about the history and culture of Bosnia in this tour than in any museum I have visited or in any book or article I have read. He provided incredible local recommendations and was incredibly warm, funny, and kind. We would absolutely recommend this tour to anyone visiting Sarajevo!

Response from Adis
Dear Ilyssa, Thank you very much for your review. I'm glad you had a great time and I hope to see you guys again. Have a nice travels! Adis

Minimum of attendees
There is no minimum number of people required for the tour.
Additional costs:
The tour does not require the payment of entrance fees or additional expenses.
Free cancellation
If you will not be able to attend the tour, please cancel your booking, otherwise the guide will be waiting for you.
Free tours
Bosnia and Herzegovina
Free walking tours in Sarajevo
When do you want to go?
Sun
Mon
Tue
Wed
Thu
Fri
Sat
Show more

Others cities to visit after Sarajevo