Hello, my name is Haktan. I am a licenced tour guide who is in love with Istanbul! I will take you to some amazing places and tell you their even more amazing stories! I studied in the USA and travelled to more than 30 countries joining the walking tours whenever I had a chance. I always dreamt of doing such tours in Istanbul and I got my tour guiding degree and started doing it 3 years ago. So far I've received great reviews and met a lot of amazing people. Looking forward to meeting you! Haktan

Constantinople has been the crossroads of the world throughout the history where different ethnicities and creeds lived side by side. In that mosaic of cultures, Karaköy and Galata represented the western face of the city. Inhabited by predominantly Christians and Jews, these neighborhoods are still home to some of the most magnificent churches and synagogues of the city.

Being the center of Russian refugees who escaped to Istanbul in 1917, the area still has several Russian churches that you may never see unless someone takes you there :)

What is surprising though is the presence of Islamic places such as Galata Sufi Lodge (Dervish Convent) and Underground Mosque where Prophet Muhammad's (pbuh) companions are buried! On the way we will visit Kılıç Ali Pasha Mosque, a masterpiece of architect Sinan.

Apart from religious diversity, the area is also known for its iconic buildings such as Galata Tower, Kamondo Stairs, our new 1.8 billion-dollar Galata Port and some mysterious masonic symbols...

On the way, I will show you many food points such as the best place to buy authentic Baklava, the most traditional Turkish Ice-cream or what Kokoreç is all about and etc etc...

-No ticket is needed for any place we will enter.
-You may want to bring a scarf to enter the mosques.
-When the tour ends you will be able to pay the guru whatever you consider fair. Some will pay €10, others $50. It's up to you! (minimum contribution is €10 per person around the world.)

Looking forward to meeting you! 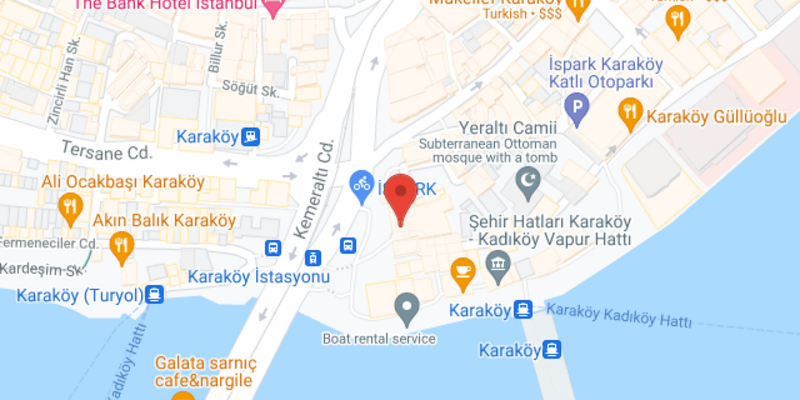 Ahmed 22 Jan 2023
Berlin
Verified booking
Travelled alone - Jan 2023
The tour was amazing. It was more than I expected. Haktan has a lot of historical information, knows how to nicely explain events and a lovely taste of food recommendations.

Jan ... 13 Jan 2023
Prague
Verified booking
Travelled in family - Jan 2023
The tour has a very nice flow and gives a interesting glimpses at modern-day Istanbul. Haktan also provides some great tips for cafés and restaurants. I wish I could connect the dots to get a better picture of modern history of Turkey.

Ana ... 02 Jan 2023
Aviles
Verified booking
Travelled in couple - Jan 2023
This tour was amazing. Haktan provided interesting information in such an entertaining and engaging way. We had to walk for some time, we stopped frequently to hear his great explanations. We loved the Karakoy and Galata neighbourhoods. Also, Haktan speaks perfect English. Highly recommended

Maram 02 Jan 2023
İstanbul
Verified booking
Travelled in couple - Jan 2023
I had so much fun today! Definitely recommend it. Haktan is an amazing person. Would love to do it again. Lots of information in a fun way.
Show 165 reviews

The tour was amazing. It was more than I expected. Haktan has a lot of historical information, knows how to nicely explain events and a lovely taste of food recommendations.

The best guide out there. Keeps the conversation very interesting !!

The tour has a very nice flow and gives a interesting glimpses at modern-day Istanbul. Haktan also provides some great tips for cafés and restaurants. I wish I could connect the dots to get a better picture of modern history of Turkey.

Minimum of attendees
There is no minimum number of people required for the tour.
Additional costs:
The tour requires the payment of entrance fees or additional expenses.
Free cancellation
If you will not be able to attend the tour, please cancel your booking, otherwise the guide will be waiting for you.
Payment methods
Only cash payment is accepted.
Free tours
Turkey
Free walking tours in İstanbul
When do you want to go?
Sun
Mon
Tue
Wed
Thu
Fri
Sat
Show more

Others cities to visit after İstanbul