Discover a Capital of Douro - Lamego

My name is Natasha Furtado. I'm a licensed in tourism. After receiving my degree in Tourism from University of Viseu (ESTGL), I decided to combine my great love of Tourism and traveling and The Guru Walk gave me this opportunity. Since then and for the last year I have been traveling all over Portugal, sharing its incomparable beauties and famous cultural sites with friends visiting the country from all over the world. Lamego, Régua, Pinhão, Vila Real and Porto are only a few of the beautiful places I love to take people to. My tours are carried out in English, Spanish, French and Portuguese with the same enthusiasm I had on my very first tour.

Hi! I'm Natasha Furtado, a Brasilian / Portuguese living in central Portugal since 2006.My insider tips and resources have helped thousands of savy travellers create unique experiences.Let me help you find historical towns, traditional villages, stunning landscapes and delicious Portuguese food and wine. Why visist Lamego in Portugal´s ? In the Upper Douro Valley, wreathed in vineyards and maize farms, Lamego is a town that turns heads for its art, Baroque architecture and wine. Every church or chapel needs a moment because it might be hiding a treasure like gilded woodcarving or the tomb of a historic figure. And if you’re truly devoted you’ll think nothing of conquering almost 700 steps to ascend the Sanctuary of Nossa Senhora dos Remédios. In the fashionable Douro Valley it’s no surprise that wine is on the agenda in Lamego, but you might not be ready for the sparkling wine, a local point of pride stored in caves in the town. Let’s explore the best things to do in Lamego: https://www.youtube.com/watch?v=jIqrhrWhO7U - Lamego´s Museum I’ll start with my favourite place in town, the Lamego Museum. An astounding collection of ancient art and artifacts, including a fully reconstructed chapel dripping with gold, is displayed within the walls of an 18th century bishop’s palace. - Cathedral of Lamego The cathedral was built by Portugal’s first king, Afonso Henriques, in the 12th century, although little remains of the original structure. This National Monument goes back to 1129, but has come through hundreds of years of refinements. Today the only feature from the early days is the square bell-tower, which bears telltale Romanesque narrow windows with semi-circular arches. The facade is Gothic, with pinnacles and detailed masonry in the ogival archivolts above the three portals. But entering the cathedral is like stepping into a different era, as the remainder of the church is from the 18th century. That is, apart from the cloister, dating to 1524 and with Renaissance arches around a dainty formal garden with a fountain. - Cine Theater Ribeiro da Conceição Lamego is often described as Portugal’s capital of the Baroque, and it is blessed many splendid buildings from the 1700s when the style reached its zenith. As well as the Nossa Senhora dos Remédios Sanctuary and the episcopal palace that houses the museum, there’s the Cine-Teatro o Ribeiro da Conceição, which is in the town’s old hospital dating to 1727, and converted in 2008. - Lamego´s Castle Cresting a rugged granite spur, Lamego’s castle is another National Monument. Not a great deal of the original fortress has made it to the 21st century, but there is still enough to transport you to the age of wars between the Moors and Christians. It was captured at the end of the 10th century by the fabled Moorish commander Almanzor, and only won back by the Christians 60 years later at the expense of many men. The quadrangular keep has a small museum inside with interactive exhibits, and from the parapet you can see the Coura , Balsemão and Varosa Rivers in one panorama. Also, keep your eyes peeled for the castle’s Moorish cistern, which lies outside the walls and has ribbed vaults held up by four arches resting on pillars. - Local Gastronomy In the Upper Douro valley the food is rustic and meaty, with lots of roasts like kid goat with potatoes and rabbit cooked in wood-fired ovens. Presunto (cured ham) is also big in Lamego, and can be had as a snack with a glass of wine, in sandwiches or with melon. A bola de Lamego is a typical sandwich, filled with ham, vinha d’alhos (marinated pork), sardines or cheese. As you make your way through the Douro Valley you may notice that maize crops are almost as plentiful as vines. Corn is used in a lot of preparations, including various salads, vinha d’alhos and broa de milho, Portuguese cornbread. - Sanctuary Nossa Senhora dos Remedios As you look up the avenue, or across from the castle, you can’t miss the monumental Baroque staircase that leads up to the Sanctuary of Our Lady of Remedies (Nossa Senhora dos Remédios). A theatrical stairway climbs Monte de Santo Estêvão (St Stephen’s Hill) to this 18th-century Baroque and Rococo sanctuary. Religious devotees have been braving the climb since at least the 1300s. The journey is half the fun, and requires 686 steps via nine landings and is enriched with tile panels, chapels, fountains, obelisks and statues. - Wine Tourism The advent of port wine was a boon to Lamego’s economy, with graceful estates sprouting up amid a sea of vines. Port is only one of several types of wine produced near Lamego; in fact the town has made a name for its sparkling varieties. These can be red or white, and you can buy them in caves (try Caves da Raposeira), going underground where the secondary fermentation that gives the wine its fizz. Lamego’s sparkling wine is generally fruity and is perfect as an aperitif. 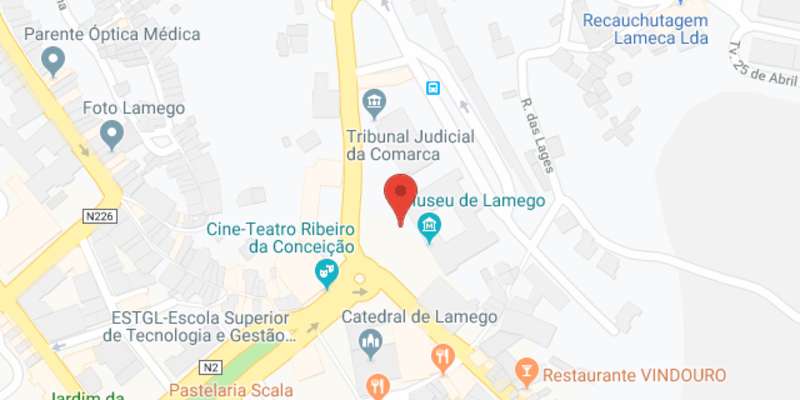 Free cancellation
If you will not be able to attend the tour, please cancel your booking, otherwise the guide will be waiting for you.
Free tours
Portugal
Free walking tours in Lamego

Others cities to visit after Lamego