If you already knew the old part of the city, where its most emblematic buildings are centered, as well as its history, but you have been left with the curiosity, to know and get to know the behind the scenes of this city. We invite you to join our tour that will guide you through what is not seen with the naked eye, since you will always have the feeling that with every step we take, Ghent has more to offer its visitors.

We will start next to the Cathedral of San Bavón , to immediately go to its sides to make a different visit to the cathedral. We will appreciate the statues of the Van Eyck brothers and, without realizing it, we will be next to the Castle of Gerardo el Diablo , from the 13th century, which goes completely unnoticed next to its neighboring cathedral. Passing by the Reep , the only part of the Scheldt river, which runs through the center of the city. Next, we'll head to a little hidden gem Achtersikkel, a little square with a tower from the 14th-15th century. And if we are talking about hidden places, and since we are in one of the most important university cities in the country, we could not stop visiting the graffiti street . In this street you will be able to appreciate the expression of the aerosol in the hands of the students or anyone who wants to leave their "talent". Between lesser-known but charming streets, we will go to the Friday Market Square , an important place of commerce in the city from ancient times to the present day. In the square we will be welcomed by one of the city's heroes, Jacobo de Artevelde . We will get to know the popular Dulle Griet , with its peculiar and striking shoe tradition. And we will continue our walk carefully so as not to be hit by the "grand canyon". If we succeed, we can get to where the Patershol Quarter begins, which after a life of ups and downs, is today an attractive trendy quarter , with its narrow alleys and passageways from the Middle Ages. And walking along the banks of the Lys River we will arrive at Kraanlei, a pier that has been named since the 16th century due to a wooden crane installed there for years. It is in this charming place in the center of Ghent, where you can take the opportunity to quench your thirst in one of its various bars or taverns , that we will end our interesting walk.

What we will appreciate during our tour:

Remember that reservations with groups (friends, family, students) of more than 6 people are not allowed. In the case of showing up to the tour groups with more than allowed, it will be at the discretion of the guide, to request a value in advance. 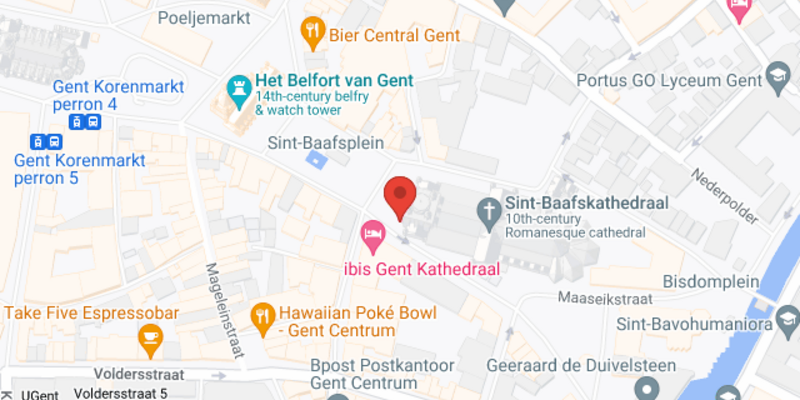