Free Walk in a hidden Old Delhi Gem, in a Mughal Era Garden

A local well versed with the history and the culture of my city. It shall be a pleasure for me to assist those who wish to explore and understand India.

Free walk in a hidden gem of Old Delhi, In a "Mughal era Garden" in the antique Old Delhi. Beat the maddening crowds of typical Old Delhi spots and rather get refreshed among the lush greenery of this heritage park. This is the best way of knowing Old Delhi's rich history, since you can listen to the guide's narration with calm. Once you are outside the park, the walking no more remains a pleasurable experience as the madening crowds, traffic and hustles plays th spoilsport.

Meet our guide outside "Gate no 5" of "Kashmere Gate " Metro Station, & we start walking towards the Mughal heritage park and it takes only 5 minutes walking. Enter into this mesmerising park, It's a beauty and no one could have ever imagined that a garden with 20 acres of space can house such a vast variety of flowers, birds, a private mosque and a majestic ruined gateway.
Our guide will explain the history of these important ruined monuments and about the illustrous "Mughal dynasty" that built those ancient marvels.
Built way back in 1748, the garden is named after Qudsia Begum, a Mughal queen and wife of emperor Muhammad Shah Rangeela. The king and queen laid the foundation of the palace with mosques, a grand entrance, waterfalls and fruit and flowerbeds. There are sky high palm trees, squirrels, peacocks and fancy pillars all setup in Persian Charbagh style.

Much of the Mughal splendour got destroyed badly during the freedom war of 1857 due to which only worn out pieces of the mosque remain. The walls have lost its color, the plaster keeps coming off, the gates to the mosque are dilapidated. But the green ambience and tall ruins are still captivating especially to a history buff.

At the end of the walk, Those who want to explore more, they can go with the guide to "Old Delhi" by hiring a TUK TUK. "Old Delhi" is just 15 minutes away via a Tuk Tuk ride costing INR 150 only.
To conclude the guide shall drop the guests at a nearest Metro train station

Dear Jai, it was indeed a pleasure to meet and be guided by you through Old Delhi. Thank you very much for sharing your knowledge regarding the Mughal Empire.

Totally away from the maddening crowds and traffic of Old Delhi, i experienced another Old delhi in the lap of mother nature, among chirping fo birds and blossoming fl...

discovered a hidden green paradise and that too in the crowded Old Delhi, actually the guide didnot take the usual market area of Old Delhi, instead he took me to a mu...

Akshardham temple complex was breathtaking, amazing feat of engineering. it was a pleasure to walk with guide Mr Brahm . also the bicycle rickshaw ride into a nearby t...

Minimum of attendees
A minimum of 5 people is required for the tour.
Additional costs:
The tour requires the payment of entrance fees or additional expenses.
Free cancellation
If you will not be able to attend the tour, please cancel your booking, otherwise the guide will be waiting for you.
Free tours
India
Free walking tours in New Delhi
When do you want to go?
Sun
Mon
Tue
Wed
Thu
Fri
Sat
Show more 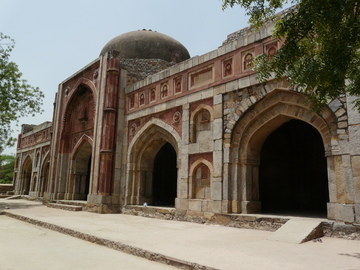 Others cities to visit after New Delhi