Dr Konstantinos D. Politis is an archaeologist and historian educated in Greece, the United States, Belgium and Britain. He specialises in the Late Antique and Medieval periods. He is chairperson of the Hellenic Society for Near Eastern Studies. Dr Politis has published seven books, numerous scholarly articles and has presented many lectures in Europe, the Near East, Australia and North America. He has also led many academic tour groups to Greece, Jordan, Turkey, Oman, Egypt and Syria. From 1988 until 2011 Dr Politis was based at the British Museum which was the principal sponsor of his excavations. He instigated the Museum at the Lowest Place on Earth in Safi (Jordan) and organised various exhibitions from Hellenism in the Near East to industrial history in modern Greece. He has also worked for the Greek Culture Ministry, Ministry of Tourism of Jordan, National Geographic Society, Athens University, UNESCO and USAID.

There are no other tours of Chalkida except the ones I have been doing during the last few years. I have a Ph.D. in ancient history and archaeology with over 40 years of experience in leading educational tours in various Mediterranean and Middle East countries.

I come from an old Chalkida family and live in our medieval house. Therefore I have a particularly good insight into the ancient and modern town.

We begin the tour with a brief background into the modern history of Chalkida which mirrors all of Greece. Although much has been demolished, architecture serves as the best indicator of its recent past. I explain the origins and significance of Neoclassical architecture but do not neglect vernacular buildings as well as remnants of medieval ones. Most important of which are the Gothic church (with its unique intact roof timbers), a 17th-century mosque (now exhibiting old engravings and maps of the city) and a synagogue (serving one of the oldest surviving Jewish communities). The medieval moat which surrounded the city was the biggest feature but only remains in one section which now houses a small but excellent folk museum.

Under the old Evripus Strait bridge, one can see currents changing precisely every six hours. This confounded Aristotle so much that legend has it he committed suicide there by jumping into the fast-moving waters.

Finally, we visit the imposing intact citadel of the city with its spectacular views (including the Aulis Bay where ancient Greek ships gathered on their way to the Trojan War) and a superb exhibition of medieval finds. By then refreshments in the adjacent cafe overlooking the Evripus Strait is a perfect way to end the tour, talk about it and relax. 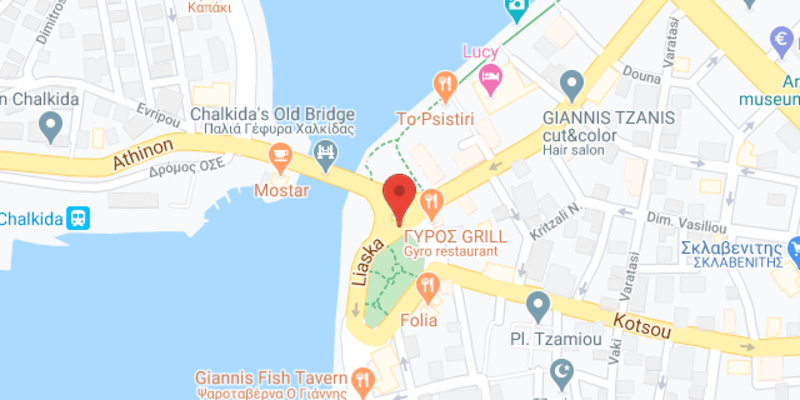 Free cancellation
If you will not be able to attend the tour, please cancel your booking, otherwise the guide will be waiting for you.
Free tours
Greece
Free walking tours in Chalcis
When do you want to go?
Sun
Mon
Tue
Wed
Thu
Fri
Sat
Show more

Others cities to visit after Chalcis