Hi ladies and gentlemen, I am Chansip. I like sharing something about cuisine, history, civilization, culture and something more with everyone in Siem Reap province.

This is an incredible experience tour of Angkor Wat. Meet me at the west side of Angkor Wat. I am here waiting for you with uniform and an official licensed card. We walk from this place to the west gate of Angkor Wat by crossing a floating bridge to visit Angkor Wat, first a Hindu, then subsequently a Buddhist, temple complex in Cambodia and the largest religious monument in the world. The temple was built by the Khmer King Suryavarman II in the early 12th century in Yasodharapura,( present-day Angkor), the capital of the Khmer Empire, as his state temple and eventual mausoleum. Breaking from the Shaivism tradition of previous kings, Angkor Wat was instead dedicated to Vishnu. As the best-preserved temple at the site, it is the only one to have remained a significant religious center since its foundation. The temple is at the top of the high classical style of Khmer architecture. It has become a symbol of Cambodia, appearing on its national flag.
What you will know from this afternoon tour.

Are you ready to experience this wonderful tour? Book me now!

Ines 12 Aug 2022
Valencia
Verified booking
Travelled in couple - Aug 2022
I highly recommend Chansip as a tour guide in the Angkor area and in Cambodia as a whole. Very professional, funny, punctual, fantastic English and nice person! All what you need in a tour guide. We were very satisfied with the service and informations shared :)
Show 1 reviews

I highly recommend Chansip as a tour guide in the Angkor area and in Cambodia as a whole. Very professional, funny, punctual, fantastic English and nice person! All what you need in a tour guide. We were very satisfied with the service and informations shared :)

Minimum of attendees
There is no minimum number of people required for the tour.
Additional costs:
The tour requires the payment of entrance fees or additional expenses.
Free cancellation
If you will not be able to attend the tour, please cancel your booking, otherwise the guide will be waiting for you.
Free tours
Cambodia
Free walking tours in Krong Siem Reap 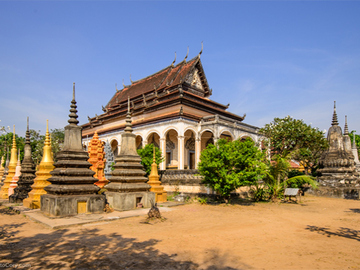 No reviews yet
Free Tour Siem Reap: Enjoy walking along the riverbank?
1h and 30min

Others cities to visit after Krong Siem Reap