After traveling the world for a while I returned to Leipzig and found no free tour on offer there. So I started off with the first free tour in the city back in 2016 and then opened in Dresden as well. Join me to learn about this vibrant places from a local. Including insights on what's on at night and what places to visit on my Free Tour.

Do you want to learn about the hidden gems of Leipzig?
Join the Original Leipzig Free Tour! We offer a view of Leipzig that you won't find elsewhere.
The Battle of Nations monument commemorates the defeat of Napoleon in 1813. Do you know that it was also the last stand of the German army in Leipzig? Learn about Robert Capa, the most famous war photographer of the Second World War, and how he is connected to Leipzig. Why did Bach compose such a wide range of music? How did the GDR control its people and even inspire love? The architectural style the Nazis hated but had to tolerate. The bakery produced 480 loaves of bread simultaneously. The poets, the composers, the writers, the revolutionaries. Leipzig has played such a huge role in German history but has been forgotten. You'll find it all on our tour. And it's not the only history.
Our guides will tell you about where you can eat the best burgers in Leipzig, how you can get cheap tickets to the Orchestra, the stories of the buildings in the town and the best places to hit at night. For all this and more, join our tour.
Have an unforgettable experience. Walk like a local with us in Leipzig!
Sights covered will include:

During 2-2,5 hours we will walk through the center of the city. 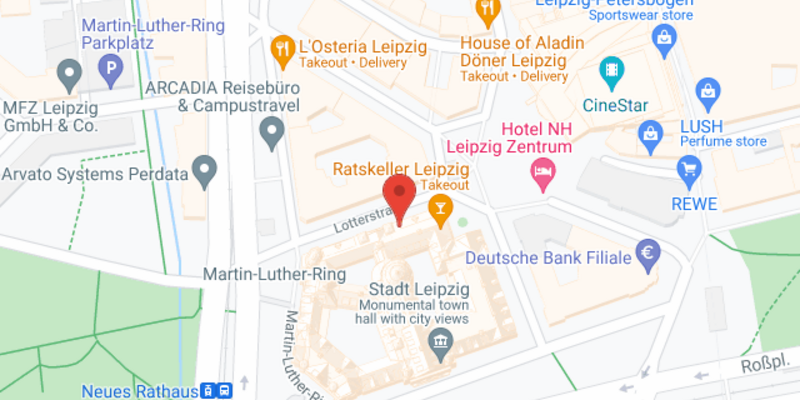 Anas... 24 Apr 2022
Thessaloniki
Verified booking
Travelled in couple - Apr 2022
Don't make your plans with regards to this tour as it can be cancelled and you won't be informed.

Don't make your plans with regards to this tour as it can be cancelled and you won't be informed.

Could be more enthusiastic...

Free cancellation
If you will not be able to attend the tour, please cancel your booking, otherwise the guide will be waiting for you.
Free tours
Germany
Free walking tours in Leipzig

Others cities to visit after Leipzig