Discover the historic center of Frankfurt and be amazed

Nicolás was born in Buenos Aires. A journalist and teacher by profession, he chose Frankfurt as his new home, like so many other foreigners who fell in love with Germany's most international city.

In our guided tour you will discover the hidden places of Frankfurt, the lifestyle, its history and its most emblematic protagonists in a pleasant and entertaining way. Frankfurt offers history and modernity at the same time. Live an exciting and authentic experience in the most international city in Germany. The meeting point will be the Cathedral of Saint Bartholomew, also known as "Kaiser Dom" or "imperial cathedral" for being the scene of the coronation of the emperors of the Holy Roman Empire for centuries. There we will begin a tour of the most emblematic places of the financial capital of the European Union. In front of the Frankfurt City Hall we will tell you how the city has evolved and, of course, what were its origins. To do this, we will walk through the old town, where its pastel-colored wooden half-timbered houses will attract your attention. Next, we will visit the River Main and then we will head towards the Church of San Pablo, chosen as the seat of the Frankfurt Parliament in the mid-19th century. One of the most important buildings in the contemporary history of the Teutonic country. We will continue the free tour in the financial district of the city, where we will run into impressive skyscrapers. We will know the most famous towers of the skyline of the great metropolis. After two hours, we will end the tour of Frankfurt at the "Alte Oper" or Old Opera, one of the most imposing buildings that does not shrink in front of the huge skyscrapers of the financial district. You will love it! 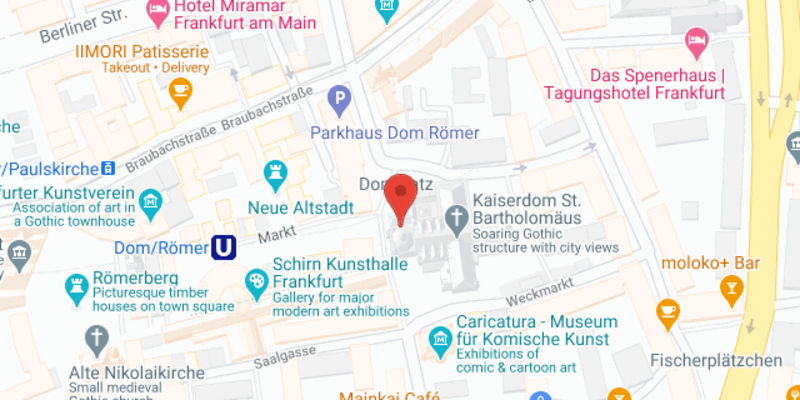 Minimum of attendees
A minimum of 4 people is required for the tour.
Additional costs:
The tour does not require the payment of entrance fees or additional expenses.
Free cancellation
If you will not be able to attend the tour, please cancel your booking, otherwise the guide will be waiting for you.
Free tours
Germany
Free walking tours in Frankfurt
When do you want to go?
Sun
Mon
Tue
Wed
Thu
Fri
Sat
Show more

Others cities to visit after Frankfurt