We, Minho Free Walking Tours, are the best free walking tour company in Braga and Guimarães, the main cities of the Minho region. We are also the only one with local guides from Braga and Guimarães! :) You are going to have the best experience! You'll never forget our beautiful region full of green and granite! Minho Free Walking Tours is a local project founded by two history teachers on February 6th, 2016. It started its activity by conducting guided tours in the city of Braga every day, twice a day. Meanwhile, this project has grown, so now it is integrated into a cultural and social cooperative named Minho de Porta Aberta - Cooperativa Cultural e Social, CRL. At this moment, the project developed by locals provides guided tours three times a day in Braga, twice a day in Guimarães (only by reservation), Bom Jesus do Monte (only by reservation), and customized tours. The actual team consists of local resident professionals linked to different areas of knowledge such as History, Archeology, Urbanism, or Cultural Studies. We are available to join you and show you our region from our point of view as locals. Visit us!

The proud birthplace of Afonso Henriques, Portugal's first independent king (born here in 1110, he later used the city to launch the main Reconquest drive against the Moors), and thus the Portuguese kingdom.
Guimarães has beautifully preserved its illustrious past, its medieval center a maze of streets and picturesque squares framed by 14th-century buildings , while on an adjacent hill stands a 1,000-year-old castle and the enormous palace built by the first Duke of Braganza in the fifteenth century.
Guimarães' glory was recognized in 2001 , when Unesco declared its old center as a World Heritage Site. In 2012, the city was the European Capital of Culture, which has given it a more creative edge.
Itinerary:

Discover the city of Guimarães with visits organized by Minho Free Walking Tours. The visits to the city center are carried out every day at the available times, according to the previous reservation in GuruWalk.
Look for the guides with the green umbrella. Our team is made up of local, interested and enthusiastic guides, who provide the visitor with unique experiences and promote the history, culture, legends and traditions, as well as the gastronomy of their city.
Our tours can be booked for free, and as it is a free paid tour, at the end of the tour the traveler can pay what he considers our work was worth. 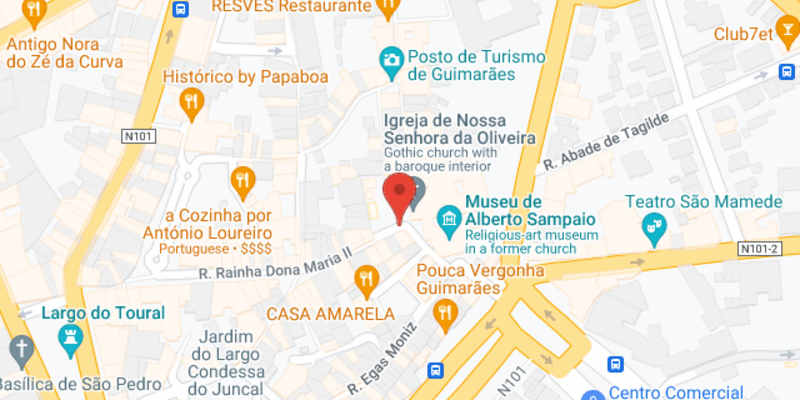 Minimum of attendees
There is no minimum number of people required for the tour.
Additional costs:
The tour does not require the payment of entrance fees or additional expenses.
Free cancellation
If you will not be able to attend the tour, please cancel your booking, otherwise the guide will be waiting for you.
Free tours
Portugal
Free walking tours in Guimaraes
When do you want to go?
Sun
Mon
Tue
Wed
Thu
Fri
Sat
Show more

Others cities to visit after Guimaraes