Free Tour of the Jewish Quarter and WWII

Hello travelers! We are a group of guides happy to live and work in Budapest! With degrees in History of Art and Tourism. And after years of experience in the city, we have come up with the recipe for the perfect free tour: INGREDIENTS: -300 grams of history (just enough so that you don't get saturated) -150 grams of legends -several tablespoons of curiosities, gossip and ne... More

Hello travelers! We are a group of guides happy to live and work in Budapest! With degrees in History of Art and Tourism. And after years of experience in the city, we have come up with the recipe for the perfect free tour: INGREDIENTS: -300 grams of history (just enough so that you don't get saturated) -150 grams of legends -several tablespoons of curiosities, gossip and news - "salt shaker" to the taste of the guide -A handful of tricks so that you learn to move around the city - A guide wanting to enjoy yourself - A motivated public PREPARATION: We start by adding the 300 grams of history, because every tour has to start with a good historical context. But immediately we add 150 grams of legends to the mixture in small doses and stir well until a well-homogeneous and balanced dough is left. Let it rest and add salt to taste until you start to hear a few laughs. That is the signal that tells you that the mix is on the right track. It is then the right time to add several spoonfuls of curiosities, gossip and current affairs, always at the request of the diner. All this is put in the oven for 2 and a half hours at maximum power. And to avoid that the dough does not drop, go adding tricks and recommendations. If the steps have been followed well, we assure you a good free tour. And if the recipe is also made in Budapest, success is guaranteed!

What happened in Hungary during the Second World War? They say that reality always surpasses fiction, and on this tour you will be able to prove it. In 1944, the Jewish Quarter became the Budapest Ghetto. An essential tour to understand the most recent and tragic past of the city, and its reflection today.

ITINERARY :
-We started in the Great Synagogue of Budapest, the largest in Europe! There we will reveal to you all the secrets of the "Jewish cathedral", why is it called that? ...
-Before entering the ghetto, we will tell you in detail "The Battle of Budapest" one of the bloodiest and most unknown of World War II.
-We will visit the synagogue cemetery and see the "Tree of Life" a precious tribute to the victims of deportations in Hungary.
-You will know the shocking story of Raoul Wallemberg , and from there we will walk to the Orthodox Synagogue, where we will talk about this Jewish community. Their rituals, costumes, kosher food and many more curiosities.

-Next we will stop at the Carl Lutz Monument to tell you who are the "just among the nations" and what role they played in this city.
-And since there is time for everything, we will also talk about urban art , since the Jewish quarter is full of murals by street artists and is the cradle of the Ruin Bars

-We will follow the trail of the "stumbling blocks" and we will reach the third synagogue of our route, Status Quo. Does your name have something to do with the rock group? We will reveal that secret to you ...

-You will be impressed by the ruined building that hides the wall of the Budapest ghetto, the last remaining testimony of the holocaust in this city. There we will talk about Nazism in Hungary, from the Party of the Arrow Cross.

-And to finish, we will go to the Ujsinhaz, to tell you the chilling story of an actress who left everything, to save lives during the holocaust.

This is a vibrant tour, powerful, crude at times, but necessary ... Those who do not know its history are doomed to repeat it. And to tell you about it, we have professional guides, graduates in Art History, Tourism and passionate about Budapest!
Do not miss this Free Tour of the Jewish Quarter and World War II. We will wait for you!

Requirements:
Minimum group of 5 people for the tour to depart

How to find me: Look for the green umbrella in the Great Synagogue 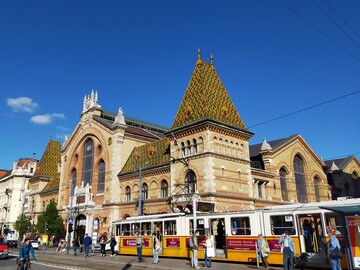