"The Birth of a Nation."

Hello !!!. You found me !!! I am the guru you are looking for, a hard-working, kind, responsible and handsome mulatto!!! With some years of experience in tourism. LOL. My name is Luis Manuel, I speak English, French and Italian. I work for a Cuban travel agency from November to April; Guide groups throughout the island and the city of Havana. Tours managed by other people. What I propose here is a dream come true!!! Thanks to Guruwalk who made me create this tour ": the birth of a nation" fruit of the passion for the history and culture of my country, countless hours of rest and leisure stolen based on the tour We include anecdotes, stories, in Havana . Old Havana was on the verge of disappearing in the 1950s and skyscrapers would have emerged from its ruins. Thanks to several institutions and people it was possible to recover this part of the city that we show you; there is still much to save. We show you a city that revives. oh!!! Very important. The Tour is organized as follows: English: Monday and Tuesday Italian: Wednesday and Thursday Spanish: Friday and Saturday Sunday: Rest... If these schedules do not suit you. We can fix it. They can also be in the afternoons or on Sundays. EVERYTHING clear previously organized !!!.

I'll show you how his history and his present intermingle indefinitely .
.
Land of sugar cane, tobacco and rum. Land of mambo, cha cha cha and salsa, but also land of betrayals and revolutions.

We will walk through the streets of colonial Havana: Obispo and its shops, Mercaderes and its natural fresco of 67 Cuban celebrities, Empedrado and its Bodeguita del Medio, Baratillo and Lamparilla. The first university in Cuba. I'm going to tell you about Ernest Hemingway. In short, a set of experiences.
The squares and their surroundings tell old anecdotes. Lies and Truths about Cuba . Real Cuba and Media Cuba.
In short, a journey of knowledge and enjoyment.

You can also see the National Capitol and the Great Theater of Havana.

You can also ask what you want, I will help you.

Meet me right outside the entrance to the Great Power Fortress. Today the Maritime Museum (sunken treasures at the bottom of the sea) in the Plaza de Armas. 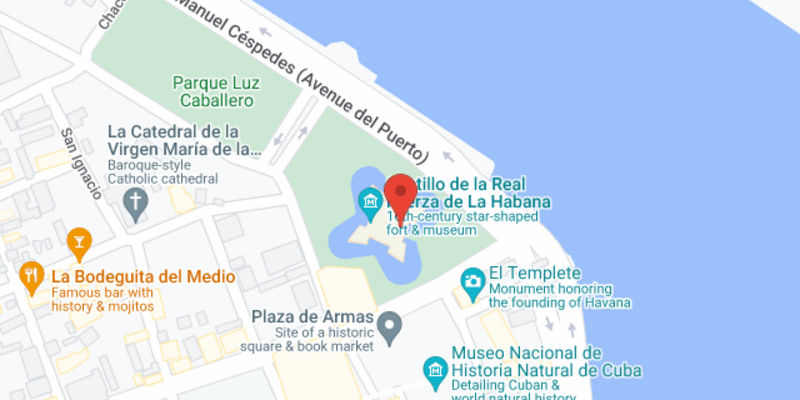 Minimum of attendees
There is no minimum number of people required for the tour.
Additional costs:
The tour requires the payment of entrance fees or additional expenses.
Free cancellation
If you will not be able to attend the tour, please cancel your booking, otherwise the guide will be waiting for you.
Free tours
Cuba
Free walking tours in Havana
When do you want to go?
Sun
Mon
Tue
Wed
Thu
Fri
Sat
Show more

Others cities to visit after Havana