Walking in the footsteps of John Calvin: Geneva's Old Town

I am an American/French expatriate who has lived in Switzerland and France for 50 years. I used to be a flight attendant with Pan American Airways and have traveled the world extensively. I did my doctoral thesis on the famous Reformer in Geneva named John Calvin (1509-1564) and wrote a book titled "A Walking Guide to John Calvin's Geneva" and founded Calvin Tours to allow v... More

I am an American/French expatriate who has lived in Switzerland and France for 50 years. I used to be a flight attendant with Pan American Airways and have traveled the world extensively. I did my doctoral thesis on the famous Reformer in Geneva named John Calvin (1509-1564) and wrote a book titled "A Walking Guide to John Calvin's Geneva" and founded Calvin Tours to allow visitors to discover Geneva's rich history through exciting walking tours.

Introduction:
Why is the tiny country of Switzerland known around the world for its quality Swiss watches, Swiss chocolates, Swiss army knives, Swiss chesses, Swiss banks, Swiss Francs, Swiss Democracy, and so many other well-known Swiss symbols?

The answer is: Largely because of one man who lived in Geneva in the 16th Century whose name is John Calvin. He was the Protestant pastor of Geneva’s largest church for 25 years, Saint Peter’s Cathedral, and the one who led the Reformation in Geneva, a movement designed to reform the Catholic church during the 16th Century.

The 2-hour walking tour of Geneva’s Old Town highlights not only the history and key sites related to John Calvin (1509-1564) but shows the incredible impact this one man had on not only on Switzerland but on the entire world, and reveals why Switzerland is known for the quality products listed above!

This tour will be unforgettable!

The tour starts on the front steps of Saint Peter’s Cathedral in the heart of the Old Town. The group enters the Cathedral and sits on the ancient benches of the Chapel of the Maccabees for an exciting 20-minute visual historical explanation (with an iPad-Pro) of the Reformation in Geneva allowing the visitor to grasp the historical context of what he will see. Then the walking tour then begins.

The group will first examine key aspects of Saint Peter’s Cathedral and hear what happened in the Cathedral during Calvin’s day which in many ways caused Switzerland to become so famous today for its quality products mentioned above! You will then walk down Calvin’s street, taste the water of Calvin’s fountain; see Calvin’s street light; and ponder the exact spot where Calvin’s house used to stand. From there we will head to the Maison Tavel (the oldest house in Geneva) to see Geneva’s guillotine and a giant model of Geneva dating from 1850. The 16th Century Geneva Cannons are next on the visit, which stand in front of the famous Geneva mosaics depicting the 3 keys events in Geneva’s history. From there, we will stop by the beautiful City Hall (the mayor’s office) and sit on the longest wooden bench in the world (mentioned in the Guinness Book of World Records). We will then walk to the famous and imposingReformation Wall where you will receive a thorough explanation of each section. We will end the tour at the Bourg de Four, the most famous city square of Geneva’s Old Town where you might decide to indulge in a delicious cup of Swiss hot chocolate at the end of the tour!

If you would like to better understand Geneva’s fascinating history you can purchase the book titled A Walking Guide to John Calvin’s Geneva: Following the Footsteps of the Great Reformer written by John Glass, for sale on Amazon.

Please book your tour today! We look forward to seeing you soon! 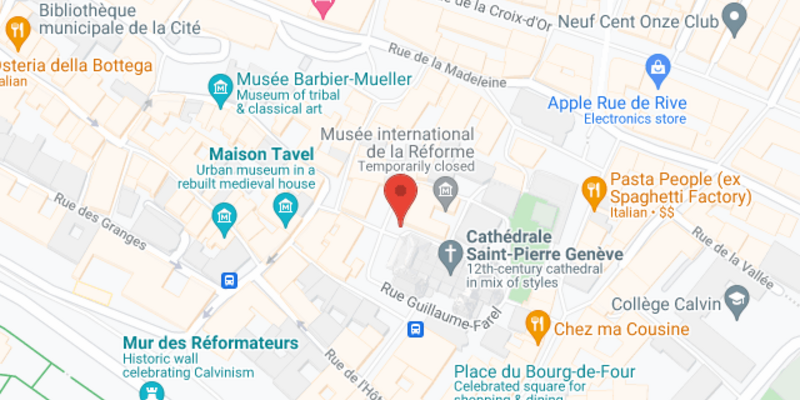 How to find me: I will be standing on the front steps of Saint Peter's Cathedral wearing a Calvin Tours black baseball cap

Interesting,informative tour on the Calvanist roots of Geneva. John is a very knowledgeable and charming guide. I recommend this tour to anyone who is interested in knowing the background to Geneva. This is not a general tour of the city.

It was a really amazing tour. It was really interesting. We recommend it, if you want to know about Jhon Calvin and the history of Genève protestanism.